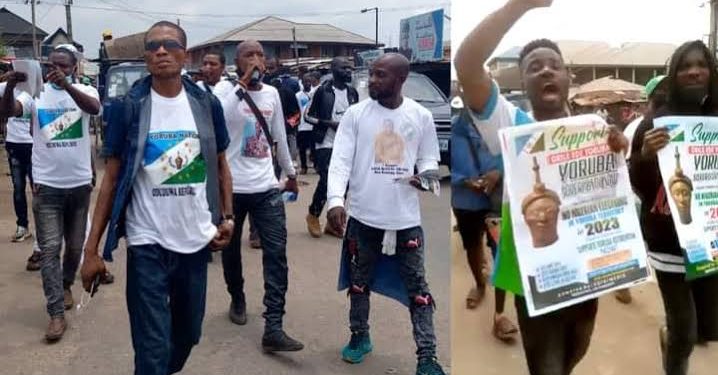 •Says “Yoruba Nation or nothing”

The Police on Saturday clashed with members of Ilana Omo Oodua in Abeokuta, Ogun State Capital during a rally organised to drum-up support for the actualisation of Yoruba Nation.

Ilana Omo Oodua, under the leadership of a renowned Professor of History, Banji Akintoye, is the leading organisation agitating for the emergence of Yoruba Nation.

The Police in Ogun State, in a statement signed by its spokesman, Abimbola Oyeyemi, had banned the rally, alleging that it was being planned to destabilise the State.

But in a swift response, the Media and Communications Secretary of Ilana Omo Oodua, Mr. Maxwell Adeleye, said the rally would go ahead, saying any attempt to stop the rally would be considered as a declaration of war against the rights to self-determination and peaceful Assembly of the Yoruba People.

“We read with total disbelief, a statement credited to the Ogun State Police Command that our Pro-Yoruba nation Nation’s rally scheduled to hold in Abeokuta, Ogun State capital tomorrow will not be allowed to hold. We want to believe the statement of the police is a joke. However, if the Police was serious about the threat, we want to let the the authorities in Ogun State know that our rally will go ahead as scheduled because the police have no power under the law to deny us of our rights to self-determination and peaceful assembly.

“We at Ilana Omo Oodua considers the statement as a declaration of war against our rights to self-determination, peaceful assembly and speech as guaranteed by the United Nations and African Unions Charters on Human Rights which Nigeria is a signatory to.

“We want to assure the police that we shall hold our demonstration very peacefully, lawfully and orderly tomorrow, and we warn that any attempt to stop the rally shall be challenged legally, logically and Internationally,” Adeleye said.

And true to their threat, armed-to-teeth Police, numbering about 100, besieged the front of Alake of Egba’s palace, venue of the rally with five Armoured Personnel Carriers (APCs) and attempted to stop the rally which was ehemently resisted by the agitators.

“I am pleased to announce that Policemen in Ogun State have obeyed the will of the people of Yoruba Nation. The people have triumphed against the Gholghotas.

“As the policemen saw the surging crowd of Yoruba men and women moving towards Eleweran Police Headquarters in drove, they quickly released our comrades protesting for Yoruba Self-Determination. I can confirm that we have rescued all the arrested comrades”, Adeleye, said in a statement made available to our correspondent.

One of the arrested protesters, Comrade Wasiu Iyanda, who spoke to Newsmen said they were picked-up as they were about starting the rally. He corroborated the position of Adeleye, stating that “the policemen quickly released us immediately they saw the surging crowd, angry and embittered, as they moved towards Eleweran.

Iyanda alleged that the Police officers who were of Hausa-Fulani origin wanted to torture them but officers of Yoruba descent refused, saying “these guys are not criminals and they broke no laws”.

The rally, led by the Secretary-General Of Ilana Omo Oodua, Arc. Opeoluwa George Akinola and the Ogun State Coordinator of the organisation, Mr. Taofeek Olawale, shut down the Abeokuta metropolis for several hours as the protesters danced around the city, singing Pro-Yoruba songs, lamenting the ordeals of the Yoruba people within the Nigerian Federation.

Addressing the crowd at Pansheke Junction, Akinola said “Yoruba Land has been encircled and subjugated. It started immediately after the indepence of 1960 and got worse when the Fulani elements introduced federal character principle in 1967.

“The oligarchies ruling Nigeria to the jugular killed Abiola. They ran the tenure of Obasanjo for him. They have taken over our economy. They control our Ports and Borders. The entire security architectures are in their hands.

“They have completed taken over the entire farm lands in Oke Ogun area of Oyo and the Yewa axis of Ogun State. Lagos State is now in the hands of their appetitives. Ekiti and Ogun forests have been hijacked by these marauders.

“They have decimated every institution. Hunger, poverty and starvation are now the orders of the day. No one could sleep with his two eyes closed. The level of youth unemployment in the country is gargantuan. We demanded for restructuring almost 22 years now but it is obvious that there’s nothing to restructure again in Nigeria. The almagamation of 1914 should be dissolved. We want our own nation outside Nigeria and this, we shall achieve peacefully and logically”, Akinola, said.