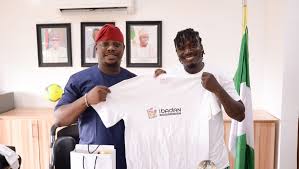 The Ibadan Film Festival, which will be held in September 2022 at The Bunkers, Ring Road Ibadan, has received more than 10,000 film submissions from 117 different nations.

According to the convener, Usman Olarotimi Ogunlade; “ A panel of jury that comprises some of the most sought after film makers, scholars, film critics and enthusiasts have been constituted and are already working on judging the movies to have the best in all the twelve categories.

The concept to conduct the film festival, according to Ogunlade, may be traced to Ibadan, Oyo State, where the first television was born.

“Ibadan is the birthplace of filmmaking, and as natives, we felt compelled to bring this home after working closely with the industry’s titans for so long. It’s crucial to establish a venue where aspiring filmmakers can display their skills, network, and talk about the direction the business is headed in.

The Ibadan International Film Festival, which has the support of the state government, will attract a variety of performers to help the state’s economy flourish even more.

You will recall the Team paid a courtesy visit to the Honorable Commissioner for Youths and Sports, Oyo State, Seun Fakorede who pledged the State Government’s unalloyed support.

Fakorede remarked that it is the responsibility of the government to foster an atmosphere in which kids may develop, and the current administration is prepared to assist young people who show initiative. “Filmmaking began here, and such an endeavour ought to take off and receive support. We can therefore guarantee that this Ministry will receive unwavering backing from the State Government, he continued.

Ojobaro Babatunde, the festival director, provided details on the event, stating that it will last three days, from September 22 to 24, 2022, in the state capital. Ojobaro claims that the purpose of the occasion is to enlist the key players in the film industry.

“We want to create opportunities for growing film makers and creatives with the Film Workshops,, brainstorming session, networking and of course film screening which will have Festivalias review films from all over the world .

“The film festival will also feature three legendary filmmakers/actors into the Ibadan international film festival hall of fame and Award Presentations for the twelve categories. Other activities lined up for the festival are Art Hang Out, film screenings, film workshops in cinematography, producing and acting, Sound Design, Production Design, Business of Film/TV and post production.”

Park Managers On The Prowl In Oyo