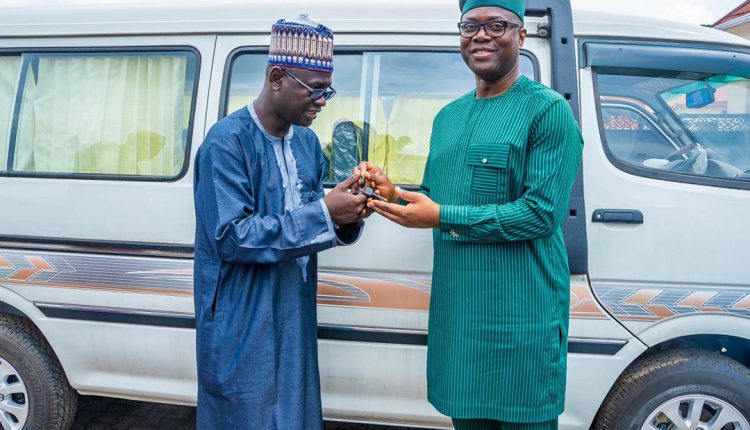 2022 RAMADAN LECTURE: Makinde Donates Bus To Guest Lecturer, Give Hajj Slots To Others

Oyo State Governor,’ Seyi Makinde on Tuesday, reaffirmed the commitment of his administration to sustaining religious harmony and peaceful coexistence in the state.

The Governor, who stated this while delivering a keynote address at the 8th annual Omi tuntun Ramadan lecture, held at the Government House Arcade, Agodi, Ibadan, explained that nobody can divide Oyo State people along religious lines.

A statement by the Chief Press Secretary to the governor, Mr. Taiwo Adisa, indicated that Governor Makinde also denied insinuations that his administration has been unfair to the muslim community in Ogbomoso zone.

The governor maintained that the people of the Oyo state have grown and evolved through a family system that easily blends Muslims with Christians in harmonious coexistence.

He pledged to continually uphold a religiously unbiased Oyo State.

The governor recalled that the day the first edition of the Ramadan lecture was held, the current State under ex-Governor Rashidi Ladoja also turned the sod on the Circular Road, but lamented that nine years after, the 110km road remained uncompleted.

“One expects that even the 32km should have been completed, they did not even do 3km including the bridges before we came into office. But we thank God today that Kabiyesi is with us, not even as High Chief but as Olubadan of Ibadanland. Very soon, I am sure we will invite the Olubadan when the road is ready for commissioning,” he said.

He also promised to provide a conducive atmosphere that will ensure that the masses and politicians cohabit peacefully.

The Governor said: “There are two things I must address so that it won’t look as if we are shying away from those issues.

“One of them is the issue of appointments. Some critics said we sidelined Muslims in Ogbomoso. But I want to say that as things stand in Oyo State of today, I am sure that there is nothing that can divide us as far as religion is concerned. If some people think they can achieve division, it is not possible.

“Concerning the Ogbomoso appointment, I tried to go down the memory lane and all the senators we have in the 9th Assembly are Muslims – Kola Balogun from Oyo South; Teslim Folarin from Oyo Central and Fatai Buhari from Oyo North, which I see as the will of God and that of the people.

“In the 8th Senate, the same thing transpired. They were not appointed because they were Muslims but because it was the will of God and the wish of the people of the state.

“So, I want to urge our leaders and clerics to always ask for correct data when some critics come to you with erroneous data.

“On the Hajj pilgrimage, we will send few people to go on the journey.”

In their lectures, the guest lecturers, Alfa Uthmah Sannu Sheu and chairman of pilgrims welfare board (Muslim wing) Professor Sayeed Malik unanimously charged the Governor not to dash the people’s hope, and to ensure he fulfills promises made to the people at all times.

The clerics commended Governor Makinde for embarking on the projects that will bring development to all the nooks and crannies of the state.

Also in their goodwill messages, the father of the day, Aare Musulumi of Yorubaland, Edo, and Delta States, Alhaji Daud Makanjuola, and chairman of the event, former Governor Rasheed Ladoja amongst others, acknowledged that Governor Makinde’s disposition to matters of religion remained commendable

The Olubadan of Ibadanland, Oba Mohood Lekan Balogun, and the chief imam of Ibadanland, Sheik Abdulganiy Agbotomokekere, Muslim clerics, government functionaries as well as other dignitaries graced the event.

My Wife Got Me Detained To Continue Her Promiscuity, Man Tells court In Ibadan

God Asked Me to Contest — 40-Year-Old Ibadan Cleric Joins Tinubu, Osinbajo, Others Declares Intention to Contest for Presidency Under APC