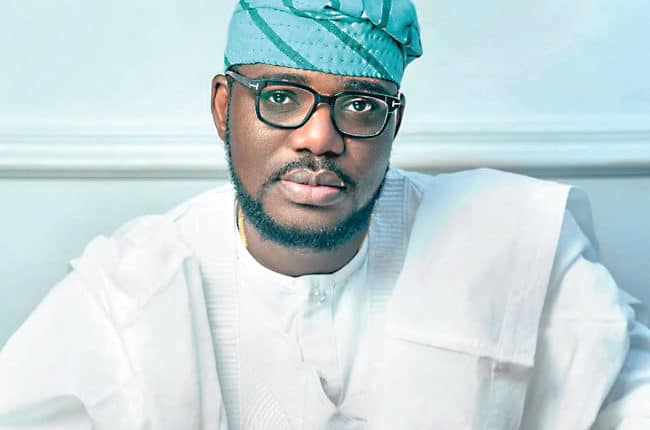 Marketing Communication Chief Executive, Abisoye Fagade, who owns Sodium Group, is a one of the frontline guber hopefuls in the All Progressives Congress (APC) in Oyo State. He speaks to DARE ADEKANMBI on what he wants to do differently, the disagreement in the party, among other issues.

You are aspiring to be governor of Oyo State and with your group, Oyo si maa dun, you seem to want to put some sweetener into the governance of the state. But to some, Oyo has been ‘sweet’ since Governor Seyi Makinde came.

Growing up, I knew Lagos as the commercial nerve centre for the country and Ibadan was more of a residential state, a place where everybody wanted to go at that time. Ibadan also used to be part of the commercial zone. But after about 15 years, things began to dwindle in Oyo State. Businesses were not prospering and people and companies were just leaving the state. So, I realised that the ‘sweetness’ in Oyo State was gradually diminishing because of how we do our politics. We began to lag behind in terms of how a proper state should run, particularly given the proximity of the state to Lagos. People who have the state the name pace-setter knew what they were doing.

Let me put your question back to you. Can you show me what pace Oyo State is setting today? That is why I came up with the philosophy of Oyo si ma dun [Oyo will prosper again]. In those days, we were number one in education, agriculture and we were setting the pace in most areas. We seem to have killed most the structures that actually made us earn the title of a pace-setting state. The philosophy is a way of registering my desire to bring back those good old days when businesses flourished and the economy of the state was strong. We can go back to our pace-setting glory as a state.

The other leg is this. Is the security situation in the state enticing enough for people to want to come and live, work and even do business in Ibadan? I will leave the answer to that question to you. If you don’t have that vision, it will be very difficult for you to key into it. Lagos-Ibadan expressway is almost completed now. How are we keying into that? For instance, there are people who live in Mowe and Ibafo, but work in Lagos. If they are buying land in those places for say N10,000, we can bring them to Oyo State where they can get land for say N1,000 and generate revenue, open up the city and create a mega city that is close to the area.

Is this the vision driving your gubernatorial aspiration?

My urge to see a better Oyo State is the vision driving my guber aspiration. Oyo State is a land that is full of milk and honey and yet we are begging. I see the seat of the governor as one that can give me the kind of political power and the budget I can create to make the state better. You will marvel when you know how much the state can generate. If Senator Bola Tinubu did not put the structure in place for the state to be able to generate so much money as it is generating now, Lagos won’t be as big as it is today. I am already looking at what tourism can create for us in Oyo State as well as what we can create from industries. What stops us from making Oyo State viable for the tech guys because the world is in the days of IT? What are we doing to attract the IT guys? If I wanted to be a House of Representatives member, I would have been more than 10 years ago. If I also wanted to be a senator, I would have worked towards that. But those positions can’t give me the executive power to make the kind of change I want to see in the state.

You are running on the platform of APC which is still a fractured party in the state. Do you see this crisis impacting on the performance of the party in 2023 elections?

The so-called crisis you mentioned is in every party. But people are just playing up one more than the other. In APC, we have leaders that are reasonable. They are just charging each other politically. Soon and I mean very soon, they will all sit together and come to a conclusion that Seyi Makinde must go. The leaders as well as the members are united in their determination to see the back of Makinde and PDP in Oyo State. We are coming together very soon because we have a common interest. We have all agreed that Oyo State deserves state manager than we currently have. Makinde has taken us back to the era before Ajimobi in terms of security and environmental cleanliness. The governor is using a populist approach to governance that can’t bring real development anywhere in the world. The governor as the carrier of the vision for the development of the state leader should take the people to where they ought to be. Doing things to please some people is like saying he will do whatever he likes once he gets a second term. That second term will not come because he will be sent out of Agodi Government House at the guber election next year. In your first term, you should work like you don’t want a second term and when you want to leave, everybody will be saying you should come back. But Makinde is not playing the game well. Security-wise, for instance, you journalists knew what the state was under Ajimobi, how people slept with their two eyes closed. But now, the security situation is messy. The peace we enjoyed under Ajimobi, where is it today? People are scared to speak up for fear that they can send someone to deal with them. So, there is a climate of fear. But we won’t allow this to go on. We are addressing our issues in APC to come out stronger and rescue the state from PDP’s maladministration.

You recently convened a meeting of elders and leaders in the party. What were you trying to achieve with the meeting?

It is simple. I feel that the most important thing for all of us is to first of all stabilize our hoe and there is no way to do that than to unite all the gladiators. I am not for anybody because I am for everybody. Many leaders came and those who could not make it due to other engagements sent in their apologies and that was a huge one for the progress of the party. It was like a God-sent meeting. People were happy because leaders that have not sat down together in months sat together at the meeting to discuss and channel a new way forward. I was just trying to broker peace. I am a man of peace and I also took the advantage of the month of Ramadan and we were also just exiting the Lenten period so that there would be genuine reconciliation.  Every tussle ends on a negotiation table. What I have done is just for everybody to sit down to negotiate.

I know what your verdict is going to be, but give us your honest assessment of the PDP government in the last three years.

The scorecard of Governor Makinde and the PDP is there for the people of the state to see. They will say I am in the opposition if I start speaking. But I want you to rate them on security, education, infrastructure and so on.

The governor is building bus terminals and roads, Moniya-Iseyin…

The N20 billion the governor sunk into the bus terminal project would have done a lot in agriculture. My dream is to, in the first year of my governorship, is to be able to feed the whole of Oyo State. When I say feed, I mean we will grow whatever it is we are consuming.

How do you intend to make that happen?

It is very easy. There are low hanging fruits in agriculture. If I sink N10 out of the N20 billion into agriculture, there will be a huge difference. How long does it take to cultivate tomatoes?

So, you agree with me that people can start buying tomato that is grown in Oyo State within three months of being a governor. How long does it take to do okro? If I sink the N20 billion spent on motor parks to promote agriculture, there will be food for people.

Let’s see that happen first and as fast as all those motor parks happened. Is transportation a serious problem in the state to warrant sinking such a huge amount of money into it? Are we in Lagos? It is no rocket science. You will see where the interest of a leader lies through his projects. You will see what he is promoting and the people he wants to make happy.

The civil servants say the governor is paying salary, has done streetlights to illuminate the dark places and reduce crimes…

Politicians have made it look like paying salary is an achievement. Workers don’t get their salaries for free. They have worked and they must earn their pay. Your headache as a governor should be how to generate enough funds to push his agenda. That is what a thinking governor should do. If we open up the state for public-private partnership and foreign direct investment, government can generate a minimum of N10billion as IGR monthly.

Can APC as currently constituted unseat Seyi Makinde in 2023?

Governor Makinde is already on his way out of office and everybody, including members of his party, can see that clearly. You can see desperation in some of the things he has been doing lately and once you are desperate, you can do anything. The little that remains of what you guys call his popularity is not enough to make him retain his job as governor. All those in the coalition that brought him to government are now with us and even people in his government who are not happy are discussing with us in APC. What Oyo APC has taken from Seyi is more than what you think he has taken from us. People are joining us in APC now, not because they want to contest, but because they don’t want Makinde to return as governor. He is losing people with credibility in PDP to us in APC.

The fact that we are many eyeing the ticket in APC means our party is very strong. Those who want to be governor in APC are big shots with a lot of political weight. This shows we have a better party. What we are going to do as a party is to look at Makinde and see what we can do to knock him off. Who is the best man among all of us that can do the job? We have too many options of strikers. We have Ronaldo, Messi and what have you. We will sit down and put our best foot forward. Once the party decides who the best person is, all of us will back the person as long as we all agree it is the person.