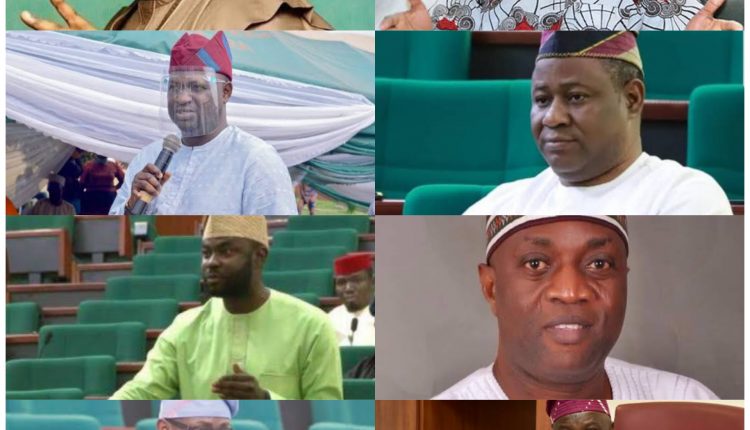 The race for who wins the Top Seat In Oyo State come 2023 has began in earnest from the opposition camp, as political bigwigs has started showing interest in the seat currently occupied by Governor Seyi Makinde.

Oloye Adebayo Adelabu’s presumed Obstacle, is a record third time senator, representing Oyo Central Senatorial District, Oloye Teslim Folarin who many believe holds the grips of the Party presently, Tessy as he’s foundly called Akéde Ọ̀yọ́ gathered that he has also purchased the Interest and Nomination Forms to Contest the governorship election in the All Progressive Congress (APC).

Oloye Teslim Folarin last contested the governorship election under the platform of The People’s Democratic Party (PDP) in 2015 were he pulled a total – 79,019 Votes to came fourth. Since the demise of the immediate past Governor of Oyo State, Sen Abiola Ajimobi, and a former Governor, Chief Adebayo Akala, Teslim Folarin has stylishly taken over the leadership of the Party, with what many Party members who don’t agree to his style of politics called the ‘Jagba Tactics’, He’s Since been adjourn as the Jagba Master after repeating same feat at the APC State Congress that produce his loyalist, A former Commissioner to Late Ajimobi, Isaac Omodewu as Chairman.

The next few weeks will be interesting in the camp of the APC, as other bigwigs eyeing to contest the gubernatorial seat are closely monitoring events and holding their cards to their chest.

The demise of the renowned king and the custodian of Yoruba culture, Late Oba Lamidi Olayiwola Adeyemi 111, has cast doubt on the political future of the Oyo crown Prince, Hon. Akeem Adeyemi Popularly Called Skimeh, As many believe that he has always use the palace power which his late Father wills to win elections.

The two term federal lawmaker, has thrown his hat into the rings, again for the third term to prove his traducers wrong of his political strength and capacity to win Elections without the help of his father or palace political powers, Prince Akeem Adeyemi will be slugging it out with his Arch rival and the Concensus candidate of the People’s Democratic Party (PDP) Hon. Kamil Akinlabi, what a show to watch for…

Honourable Segun Dokun Odebunmi popularly known as Bunvic and Chairman House Committee on Information, National Orientation, Ethics and Value Akéde Ọ̀yọ́ also learnt that he has pick up his interest and nomination forms, and he is gunning for a fourth term in a row, The Ogbomoso born politician is the undisputed champion winning the battle for a record straight third term, Bunvic understands his game very well, he is said to still posses the love of his people, reasons he is confident of winning a record fourth straight term, though not without a fight from the Rulling People’s Democratic Party (PDP) Consensus Candidate Hon. Femi Onireti Who is also believed to be rooted. An interesting political game follow! Isn’t it?

Yunus Akintunde Akéde Ọ̀yọ́ also learnt Purchased the Interest and Nomination Forms to Contest the Oyo Central Senatorial Seat, The Oyo Born politician is a well known politician across the length and breath of Oyo four local government in Oyo federal Constituency, whether he can repeat same feat at Ibadan lesser city’s is yet to be known, Yunus Akintunde is banking on his financial war chest, to put his name among the occupiers of the seat in history, If he succeeded by wining the party’s ticket he will have another mountain to climb in the consensus candidate of the People’s Democratic Party (PDP) Chief Bisi ILAKA who will be contesting for record fourth time, with many seeing this has his best bet to win, considering the caliber of politicians he will be contesting against in 2023, They both have to ganer good votes from the 11 local government comprising the Oyo Central Senatorial District to stand a chance of winning the seat.

Saheed Akinade-Fijabi’s Akéde Ọ̀yọ́ learnt has Also pick his interest and nomination forms, his name rings bell in the politics of Oyo State for eight solid years, as a member of the house of representatives, representing Ibadan North West/South West federal Constituency, all thanks to the fuji mystero King Wasiu Ayinde Marshall Song and his performance at the green chamber, He lost his third term bid after series of politicking to the incumbent Hon. Stanley Olajide Odidi-Omo, If he succeeded by wining the party’s ticket he will again for the second time slug it out with the People’s Democratic Party (PDP) consensus candidate Hon. Stanley Olajide Odidi-Omo. What a battle to fight!!!

Hon. Adedapo Lam-Adesina a former commissioner for Youth and Sport and a member of the house of representatives, Akéde Ọ̀yọ́ has learnt also picked the interest and nomination forms to re-contest the Ibadan North East/South East federal constituency seat, Omo-olore as he’s foundly call will have another strong contender to battle with if he succeeded in clinching the his party ticket, Hon. Abass Adigun Agboworin though still having hurdles and yet to be cleared as consensus candidate for his Party, because other aspirants are hell bent on primaries, won’t be an easy ride for him, The game is still wide open, Agboworin will give him a run for his money.

Recall that Akéde Ọ̀yọ́ reported that the only PDP Senator Kola Balogun has resigned his membership of the People’s Democratic Party, details of his next move is yet to be revealed but sources said he’s trying to get ckear signals from the APC to contest the Oyo South Senatorial District Ticket or he move to Social Democratic Party (SDP) to re-contest for his second term bid, after been denied by Governor Seyi Makinde and his ticket given to Chief Joseph Tegbe…In the next few days details of his next move will be unveil.

One of the most performing senators Oyo State have produced an illustrious son of Ogbomoso, Senator Faith Buhari, Akéde Ọ̀yọ́ learnt is yet to purchase either the gubernatorial form or the Oyo North Senatorial District form, recall that Akéde Ọ̀yọ́ had earlier reported that there are moves by the Oyo State Governor Seyi Makinde to draft him into his camp, with the same ticket to contest under the platform of the People’s Democratic Party (PDP), A group loyal to him has since debunked the rumors, while we await official response from the senator, he’s yet to pick any of the interest and nomination forms.

The next few weeks are bound to be interesting as Politicians will be making interesting moves, as typical Nigerian Politicians, Once their interest is threatened they make moves that caught their supporters and followers unaware…. Akéde Ọ̀yọ́ will keep updating all the latest happening politically while spicing it up with their politicking Moves…..