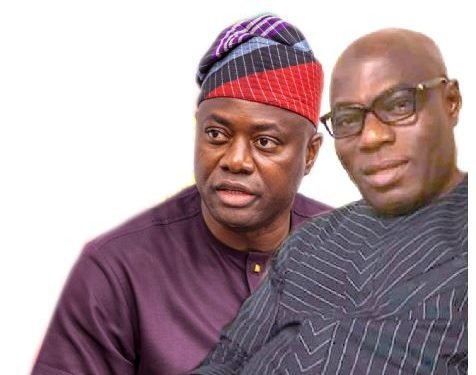 Developments within the ruling Peoples Democratic Party (PDP) in Oyo State are presenting challenges that may shape the party’s chances in the 2023 general elections, Assistant Editor, ‘Dare Odufowokan, reports.

Having staved off the challenges placed on his way by ex-governor Ayo Fayose and his group at the last zonal congress of the Peoples Democratic Party (PDP) in the southwest, and confirming his leadership of the party in the zone with the victory of former deputy governor, Taofik Arapaja and his team, Governor Seyi Makinde of Oyo State has fresh hurdles to scale in the party.

The first is ending the move by some aggrieved party leaders to factionalise the party ahead of the 2023 general elections, the second is pacifying some of his loyalists who now feel they are not being carried along enough by the governor in the affairs of government and party, while the third is to calm frayed nerves by convincing party leaders and members that the recent dissolution of his cabinet is not targeted at any individuals or group within the party.

Amidst claims by the governor and the leadership of the PDP in Oyo state that efforts at reconciling all aggrieved party leaders and members are in top gear, the party made a disgraceful return to its violent past during the week when heavily armed masked men reportedly stormed a parallel party secretariat located at No 2, Abass Okunola Street, Bodija, Ibadan, vandalising vehicles and other items.

The development, according to party sources, climaxed weeks of allegations and counter allegations between two groups within the party over the running of the PDP in the state. While the faction opposed to governor Makinde accused him of pocketing the party leadership and marginalizing those not in agreement with him, the leadership of the PDP in Oyo state deny the allegations and accused the governor’s opponent of plotting against the administration.

“We find it rather laughable and preposterous that majority of the so called, self-acclaimed and passive leaders who are defaming, disparaging and embarrassing the hard earned victory of the party today were caught in bed with the opposition parties severally before the last general elections. How do you describe PDP leaders who publicly campaigned for candidates of other parties and even mobilized their followers to vote for ADP/ADC and APC candidates on the Election Day?”

“Many of these leaders who did not vote nor supported the candidates of the party at the national assembly and presidential elections forgot that the major negotiating data that birthed the coalition that made the gubernatorial victory easy for us was the results and the achievements of the party at the first elections which many of them worked against the interest of the party,” the party said in a recent release.

But the governor’s critics accused him of abandoning party faithful and leaders who worked hard for his victory in 2019 and patronizing only his cronies and family members. “The governor is the one stoking the fire of factionalisation. He is ignoring the real leaders of the party and hobnobbing with clowns and cronies,” a leader of the party claimed.

The crisis unsettling the party assumed a worrisome dimension when party leaders opposed to then governor came together and opened a parallel party office in Ibadan. It was reliably gathered that the move was in preparation for the party’s congress coming up in few weeks. According to party sources, the faction may be enjoying the support of some national leaders of the party in their bid to wrestle control of the PDP in Oyo with Makinde.

The office is located at Bodija area of the state capital. Originally, the state chapter of the PDP has its state secretariat at Molete, also in Ibadan. Interestingly, the new factional office is a few minutes’ drive from the Oyo State Government Secretariat, where Makinde calls the shot. Members of the PDP faction claims the actions of the Makinde-led faction pushed them to open the new office.

A chieftain of the PDP in the state, Chief Adebisi Olopoenia, while speaking with reporters at the new party office in Ibadan, said “We don’t believe in those at Molete office. We are not part of them in Molete. We can’t trust them.” Sources claimed the opening of the factional office is the outcome of a stakeholders’ meeting convened by leaders opposed Makinde’s leadership. Some aggrieved PDP chieftains, including Hon. Mulikat Akande- Adeola, Hon. Muraina Ajibola, Alhaji AbdulRasheed Adebisi Olopoeyan, Engr. Femi Babalola Jogor and others had convened a meeting of members across the state to ‘salvage’ the party.

At the meeting, the stakeholders resolved to ‘save the PDP from mismanagement and egoistic tendencies of the State Governor, Engr. Seyi Makinde,’ while frowning at the Governor’s alleged attitude of giving party patronage to non- party members as against genuine party members, who laboured to bring the PDP back to power in Oyo State. They also alerted the national leadership that Oyo State PDP has been factionalized into two.

But leadership of the PDP in the state dismissed the development. The party’s State Publicity Secretary, Akeem Olatunji, while responding to questions on the opening of a factional office, described the action as a comedy. Olatunji told The Nation the secretariat at Molete remains the only recognised in the state. He declared those behind opening of the new office are joking because it contravenes constitution of the party, vowing those bent on causing troubles will face the full wrath of the law.

“Political party is not what someone can just come up with. It has to be registered with INEC. We are the only recognised chapter of PDP in the state. If anybody is preparing for the congress and they feels that they are popular, they should go and obtained form in preparation for the congress. The new office can never exist and if it does, it’s just a comedy, it is illegal because it’s been opened by faceless people. It is not in existence because if at all there is going to be a secretariat, there should be executives running it,” he said.

Seventeen commissioners and the Chief of Staff to the Governor, Bisi Ilaka, were affected in the sacking. The Chief Press Secretary to the Governor, Taiwo Adisa, who announced the dissolution in a statement, said three council members were spared. He gave the identities of the three members as the Secretary to the State Government, Head of Service and the Director General of Due Process office. But critics of the governor continued to accuse him of planning to weed ‘original PDP members’ out of his cabinet. They claimed he plans to replace the sacked cabinet members with his cronies alone.

“Note that the cabinet just dissolved by the governor was constituted by party leaders and other stakeholders after the 2019 gubernatorial victory. All the coalition parties and groups made input in one way or the other. Now that he has done away with that arrangement, let us see if he will ask the stakeholders to give him nominees for the new cabinet. I can tell you for free that he will not. His plan is to weed away the original PDP members who worked for his victory,” our source, a former member of the House of Representatives, said.

The Nation gathered that PDP chieftains in the state are now patiently waiting for the governor to reconvene the cabinet. This, observers say, may give Makinde time and chance to buy over some of the undecided chieftains. “The move is a smart one politically. Many of those who will ordinarily join the other faction out of anger are now waiting to see if the governor will look their way in the new appointments. That is good for him to get more loyalists,” an observer said.

Already, various groups within and outside the party have been reaching out to the governor to consider their interests in appointing the new cabinet. “Makinde hs proven that he understands the game of politics. With the dissolution of the state cabinet, he has bought for himself, time and chance in the ongoing power struggle within his party. Just wait and see how the other faction will fare in a matter of days. If he makes his moves well, he will dismantle the group and end the plot to destabilise PDP in Oyo state,” another observer said.

Another twist to the unfolding saga was the move by PDP youths across the state to distance themselves from the leadership of Adekola Adeoye, the elected State Youth leader of the party. Pundits say the development cannot be disassociated from the governor’s camp in its bid to curtail Makinde’s critics within the party. Adekoya, it should be recalled, has been associating openly with PDP leaders opposed to the governor’s leadership of the party. He was at the Stakeholders’ meeting held at Jogor Centre where the new PDP faction was mooted.

A communique issued after the meeting of the 33 Local Government Youth leaders held at the State Party Secretariat, Molete, Ibadan recently announced the excommunication of Adeoye by PDP youths, after passing a vote of no confidence on the embattled state PDP youth leader. “We want to completely disown and distant ourselves from the futile journey embarked upon by the embattled State Youth Leader, Mr. Adekola Adeoye. We also use this medium to say that after much considerations and deliberations and with all form of consciousness, we say that we have lost total believe in his ability to lead PDP Youths,” the Communiqué read in part.