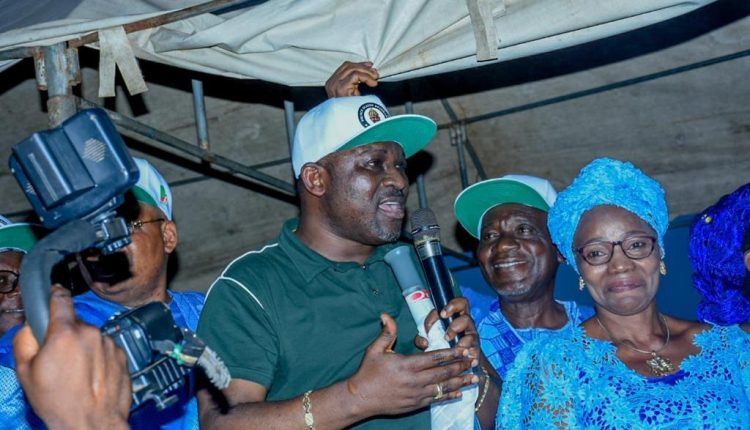 The Ibadan North Local Government Chapter of the All Progressives Congress (APC) on Wednesday 11th May 2022 played host to thousands of party faithfuls, leaders, stakeholders and general constituents of Ibadan North Federal Constituency who witnessed the declaration of the current serving Honorable, Prince Olaide Akinremi popularly known as Jagaban who had come to intimate the good people of Ibadan North of his intention to run for a second term of office.

Hon. Prince Olaide Akinremi who was elected as the House of Representatives member for Ibadan North Federal Constituency under the APC in 2019 was heartily welcomed amidst singing and fanfare by teeming numbers of his constituents at the Oke Apon venue of the weekly APC Local Government meeting in Oje-igosun area of Ibadan North, and characteristically, he also joined the people in singing and dancing, even as encomia, good wishes and prayers rented the air.

The well performing Honorable in his address expressed profound gratitude to the entire rank and file of All Progressives Congress (APC) leaders and members in Ibadan North Federal Constituency, for their consistent support and goodwill that he has enjoyed since 2019. He also acknowledged greatly, the uncountable numbers of Ibadan North constituents who continue to show enormous affection and appreciation towards him.

While giving account of his stewardship, Hon. Prince Olaide Akinremi (Jagaban) highlighted human capacity development as a special category in which he has been able to make far reaching impacts, with over 350 jobs for graduate & less graduate youths, vocational & entrepreneurial trainings for over 800 women and youths, and various forms of empowerment (over 1000) for skilled & unskilled members of his constituency.

He went further to itemize infrastructural projects which includes multiple blocks of fully equipped classrooms in no less than 10 schools, modern bore hole for a number of communities, road rehabilitation works, erosion control works and street lights in multiple hundreds so far. He also enumerated construction of health and maternity centres, skill acquisition centre, community town hall, cassava processing plant, glaucoma centre among other landmark infrastructures for the benefit of the good people of Ibadan North.

More so, he highlighted grants and scholarship to indigent students, health programmes where free treatment and provision of free medical aids were available, and payment of hospital bills of stranded constituents among others as part of his social impact in the lives of numerous people in Ibadan North Federal Constituency.

Hon. Prince Olaide Akinremi assured members of his constituency of even more democratic dividends, as so much is still in store for this calendar year, and many more communities and individuals are earmarked to benefit from different projects and empowerments. He thereby solicited for everyone’s support to once again represent Ibadan North Federal Constituency at the House of Representatives.

In what could be described as an act of one good turn deserves another, apex leaders of the All Progressives Congress in Ibadan North Federal Constituency unanimously agreed to support Hon. Prince Olaide Akinremi (Jagaban) for a second term, and presented him with an automatic ticket for his second term bid to that effect, to the admiration and applause of thousands of party faithfuls present.

Speaking on behalf of fellow apex leaders, Alhaji B.A.O Oladeji stated without mincing words that Hon. Olaide Akinremi isn’t an aspirant at this point, as he is a candidate they have all endorsed for a second term following his stellar performance, one which is unequaled in the history of Ibadan North Federal Constituency, and that as such, there isn’t any vacancy for the house of representatives seat of Ibadan North.

Excitingly, this epoch declaration event also witnessed the official acceptance of defectors from other political parties into the Ibadan North All Progressives Congress (APC) fold by the State Chairman of the Oyo APC Hon. Isaac Ajiboye Omodewu, and alongside Hon. Prince Olaide Akinremi (Jagaban) and the apex leaders of the party, these new set of stakeholders, stalwarts and members who have now added to the intimidating numbers of APC members in Ibadan North Local Government were gracefully received.

Hon. Isaac Omodewu in his address lauded Hon. Prince Olaide Akinremi for been a pride to Oyo APC, for all his giant strides and enviable representation, and he called on party faithfuls present to support people like Hon. Jagaban who continues to shine lights of hope into the lives of his constituents.

Among the political heavyweights received into the Ibadan North chapter of the APC are Hon. Demola Omotosho, Alhaji Wasiu Emiola, Alhaji Omilabu Ghandi, Hon. Leke Olawuyi, Mrs Adebola Babalola etc.
Hon. Prince Olaide Akinremi stated that he is elated to welcome them all, and encouraged party members to integrate with them as the party focuses on winning all elective positions in Oyo State in the 2023 general elections.