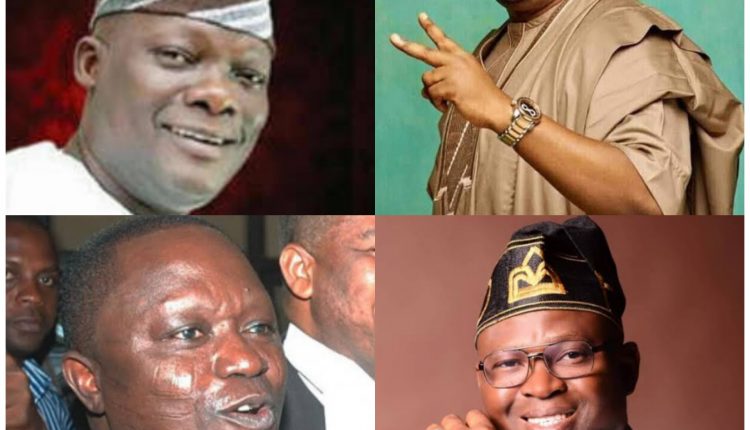 The contests are among familiar foes in Oyo APC ,will have a similar history of internal crises.

However, a political analyst in the state, Biodun Ogidan, said the PDP has been more stable in recent times and better organised than the main opposition APC.

Those contesting for the APC ticket include the party’s candidate in 2019, Adebayo Adelabu; the senator representing Oyo Central, Teslim Folarin; and two governorship aspirants in 2019, Azeez Adeduntan and Akeem Agbaje.

Others are a senior lawyer, Niyi Akintola; Chairman of the board of the Nigeria Communications Commission (NCC), Adeolu Akande, and a new entrant into the party, Hakeem Alao.

But in reality, the fight is between Messrs Folarin and Adelabu because their political antecedents place them high above the rest.

Both have considerable followings and popularity within Ibadan, the state capital and largest voting bloc in the state. They both are well-grounded politically, and have deep pockets.

A political reporter in the state, Musiliudeen Atanda, added that the two aspirants can also match each other in political enforcement, or thuggery as he called it.

The APC appears to be emerging from its perennial crisis ahead of the 2023 elections. The realisation that they have to fight together to have any chance of recovering power seems to have tempered the inclination of the leaders for intra-party duels.

The crisis in the former ruling party in the state dated back to the 2018, when two groups held parallel local government congresses and a state congress. That division obviously contributed to the party’s loss in 2019, especially in the governorship election.

The APC has since suffered from being out of government in the state in the last three years.

Following the disastrous showing at the polls in 2019, and after several reconciliation attempts had failed, there is a renewal of hope in the party.

However, a bitter primary may again burn out the party’s energy for the governorship election proper.

“No one will be stepping down for anyone as you can see, let them go to the primaries and slug it out. Whoever emerges as winner will be seen by all,” a party member, Toba Olusegun, said.

Mr Folarin is believed to control APC leadership in the state. He is a long serving senator with entrenched political structures.

Mr Adelabu came close to victory at the last governorship election, which brought Governor Makinde of the PDP to power.

Although the setting in which he got the ticket for the last election has changed, Mr Adelabu believes that he has the majority of the party’s delegates behind him.

In September 2018 when the APC held its governorship primary in Ibadan, most of the aspirants angrily withdrew in the last minute. Their fingers were pointed at the then Governor Abiola Ajimobi who they accused of imposing Mr Adelabu, who had just retired from the Central Bank of Nigeria, as the flag bearer.

Mr Adelabu was virtually nominated unopposed but the setting is completely different now.

“He is financially strong, possesses academic and bureaucratic experience and is popular in his area. But he is deficient in the “Amala” politics, which drives the flow of power, when compared to Mr Folarin,” Mr Adebayo, the journalist who covers political events in Oyo State, said.

But as you can expect of the APC in Oyo, trouble looms in an allegation that the delegates’ list was manipulated. AKÉDE OYO could not immediately verify the allegation. However, this has become a recurring feature in nearly all the primaries of the party so far.