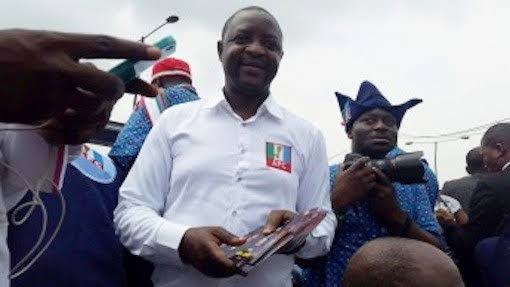 Indications have emerged on how the Minister of Sports and Youth Development, Sunday Dare is using maturity and decency to normalise the Oyo State chapter of the ruling All Progressive Congress (APC) ahead of 2023 general elections.

It was gathered that Dare, from Ogbomoso town had been political strategist to eminent Nigerians, including Asiwaju Bola Ahmed Tinubu.

Oyo State chapter of APC had been in crisis since the administration of the immediate past Governor of the State, late Abiola Ajimobi.

InsideOyo recalls that the crisis which broke out at the twilight of Ajimobi’s administration made some chieftains of the party to join another political parties. The party lost the gubernatorial seat to Governor Seyi Makinde in 2019.

It was however gathered Dare, playing clean, decent and inclusive politics is currently repositioning the party in order to reclaim the pacesetter state from Makinde in 2023.

A member of the party told our correspondent on Tuesday that the maturity, liberality of some of the leaders of the party, particularly Dare made the recently held Ward and local government congresses of the party to be peaceful.

This is despite the crisis that is currently rocking some states chapters of the party in the South West region.

It was gathered that four state chapters of the party, conducted parallel ward and local government congresses.

Some of those states are Lagos, where five factions have emerged, Ogun, where three factions are existing and Osun, where the two dominant factions exists.

In Osun, two camps, one loyal to the governor, Adegboyega Oyetola and his predecessor, Rauf Aregbesola are engaging in supremacy battle.

In Ogun State, three major factions exists, they are one loyal to Senator Ibikunle Amosun, another loyal to Governor Dapo Abiodun and the one loyal to former governor Aremo Olusegun Osoba.

Findings by our correspondent revealed no such pronounced factions or groups exist in APC.

A close ally of the Minister who spoke with our correspondent on Wednesday noted that the Minister has been able to douse the tension because of his decent, inclusive and cohesive approach to politics. He is not in anyway been overbearing in the affairs of the party.

“While some are desperate and seeking means of influencing Committee chairmen and members from Abuja for personal gains, Sunday Dare has been preaching and working for unity, inclusiveness and cohesion in the party. He has remained a great Ambassador of President Muhammadu Buhari, playing decent politics to the admiration of all. He has not in anyway abuse the power and privilege of being a Minister.

“As the representative of the President in Oyo State, the Minister has exhibited profound capacity and competence in leadership and this has impacted positively in the fortunes of our party.
“That is why we had rancour free congresses. We had the ward and local government congresses”.

Publicity Secretary of the party, Dr. AbdulAzeez Olatunde when contacted noted that leaders of the party have agreed to burry their differences in order to reclaim the state in 2023.

He said “Yes. We have peace in Oyo State because we have been able to address ourselves holistically and with seriousness of minds.

“Out of our disagreement, we carelessly lost the gubernatorial seat to Makinde in 2019.

“The truth of the matter is that everybody have realised that without us working together, we are going nowhere”.