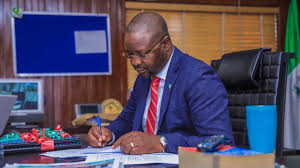 2023: I Have No Plans To Contest Oyo Governorship Election — Sunday Dare

The Minister of Youths and Sports Development, Sunday Dare, has refuted rumours that he was planning to contest in the Oyo state governorship election come 2023.

The former Federal Executive Commissioner at the Nigerian Communications Commission (NCC) in an interview with The Punch claimed his plan “right now is to succeed at the assignment given to me by President Muhammadu Buhari for the Nigerian people.

“No. No plans for governorship”.

Narrating his transition into politics, Dare said; “You know I have had a number of transitions; I have transited from being a journalist essentially to being a manager, a news manager at the Voice of America.

“But even before then, I worked to help build new political alignments. Under that, we moved from the alliance of the opposition parties to the merger when I worked with Asiwaju Bola Ahmed Tinubu as Chief of Staff.

“Thereafter, I got my first major public appointment when President Muhammadu Buhari made me the Federal Executive Commissioner at the Nigerian Communications Commission where I worked for two and a half years.

“I have said in the past, it is like moving from a bit of theory into practicality. You know, unless you step into the puddle you cannot say exactly what the texture is.

“So, moving from being a journalist, being an analyst, being a writer, being a reviewer and all, to now having to deal with implementing and turning government policies and initiatives into a reality was quite a transition.

“But because I have the experience of managing resources and administration at both international and local levels, all of these came together. What, for me, was important was the marriage between media and public policy.

“So, as a media person you serve as a barometer but also as a public servant, so, it is quite a transition. But I think I settled down into that transition earlier because I was able to marry these two worlds.

“We are two years in the saddle, the jury is still out, we have tried our best, we have done things differently, we have ruffled a bit of feather, we have shaken the table, some do not agree with us, but as a journalist, I deal with facts.

“I am able to compare what I met on the ground with what we have done; I am able to talk about the new change we brought, which is deliberate and for some of them the impact will be felt when we are long gone”.

OYO101: The Return of Oyo Commissioners And Its Implications For GSM Re-election Bid | Muftau Gbadegesin

Seun Fakorede: Before It Is Too Late || By Hassan Olaoniye