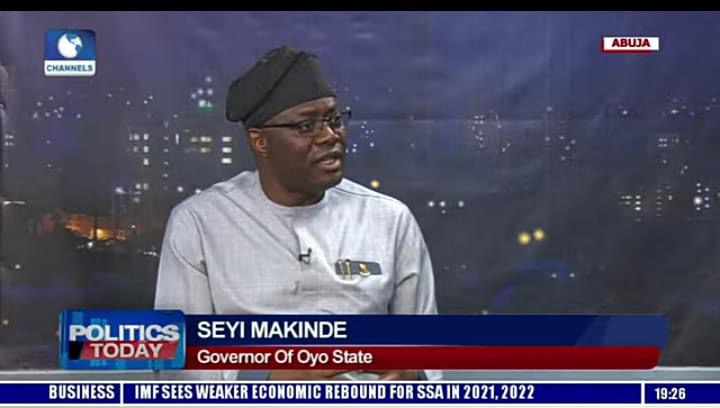 2023: I’ve No Presidential Ambition—Makinde • Era Of Impunity Is Over In PDP

The Governor of Oyo State, Seyi Makinde, has denied that members of the Peoples Democratic Party Governors’ Forum are mounting pressure on the outgoing National Chairman of the PDP, Uche Secondus, to withdraw his case against the party from court.

Makinde also denied having presidential or vice-presidential ambition in the 2023 general elections.

This is just as he stated that members of the PDP who have failed to deploy the internal dispute resolution mechanism of the party before dragging it before courts, especially towards frustrating the forthcoming national convention, should not be allowed to benefit from the party.

The governor made these known while featuring on Politics Today, a current affairs programme on Channels Television, which our correspondent monitored from Abuja on Thursday.

Responding to a question on the likely effect of the case instituted by Secondus on the forthcoming national convention of the PDP, Makinde said, “This is a democratic party. We believe in the judiciary. By all means, he can go ahead with his case. But we have mechanisms internally for the party to resolve issues within ourselves and I still believe that that mechanism is still there.”

When asked to confirm the report that PDP governors were pressurising Secondus to stop the legal action, he said, “We cannot put pressure on him. These are adults; these are leaders in their own rights. When you are leading a state, it does not happen just like that. No. You must have gone through a process. You must have been scrutinised by people of your state before you are deemed fit to occupy the status or position of a state governor.”

On the allegation that Secondus was unfairly treated, Makinde said, “This is somebody that, at the inception of this Fourth Republic, he was the chairman of the party in Rivers State. Then, he moved from Rivers to the national (leadership). He was the National Organising Secretary of the party. He was Deputy National Chairman. He was Acting Chairman and he was the National Chairman. I would think that he has benefitted so much from the party and the least we expected from him was to really give back to the party and be a stabiliser for the party.”

The governor said if he was in Secondus’ shoes, “I would listen to the voice of reasoning.”

Secondus is challenging his removal as National Chairman of the PDP in court.

When asked about the disqualification of three PDP leadership aspirants especially when the party had once pardoned its members of similar offences, Makinde said, “At some points, you have to draw the line. Yes, people have been doing things in the past and they have been getting away with it. But there has to be a point where the party will have to say, ‘Enough of this!’

“You have the internal mechanism of the party to settle any issues that you may have. Besides, what exactly are we trying to do? We are trying to send a message to Nigerians: we are going towards the general elections in 2023 and we need to let Nigerians know that this is a party that will stand for discipline, unity and a party that they should look up to whenever they are thinking of how to fix the problems that we are in. And we cannot do that in an atmosphere of impunity.”

Makinde also disclosed that he had settled with a former governor of Ekiti State, Ayodele Fayose over the leadership of the PDP in the South-West.

“We have put all of that behind us; that was before the PDP zonal congress. We are done with the zonal congress. It has come and gone. I am going to be at Governor Fayose’s son’s wedding on Saturday,” he said.

According to the governor, it is the first time in the history of the PDP and political parties in Nigeria where a party is about to hold an elective convention and out of the 21 positions to be contested, about 16 has been settled through consensus including the national chairmanship position.