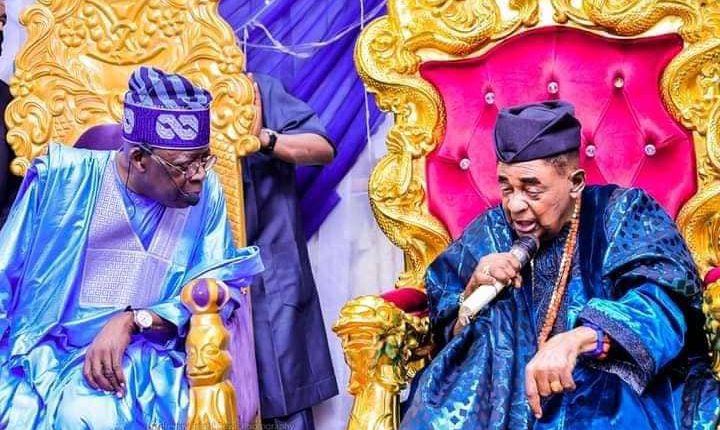 Former Lagos State Governor, Asiwaju Bola Tinubu, on Sunday, visited the Alaafin of Oyo, Oba Lamidi Adeyemi, to seek support and royal blessing for his ambition to succeed the President, Major General Muhammadu Buhari (retd.), as the president of Nigeria in 2023.

The APC National Leader’s visit to the Alaafin Palace was in continuation of his consultation which had taken him to some prominent traditional rulers.

A crowd of residents went to where welcome him where his helicopter landed with many of them hailing him and wishing him success in his efforts to rule the country.

Tinubu said, “All I came for today is to seek your blessing, your cooperation, your prayer for me to become the President of the Federal Republic of. Nigeria.”

The Alaafin prayed for Tinubu to succeed in his effort.

He said he was confident that Yoruba’s ancestors would support him to become the president.

Some of the supporters of Tinubu, led by Senator Dayo Adeyeye, had visited the monarch in December to solicit support for the former Lagos state governor.