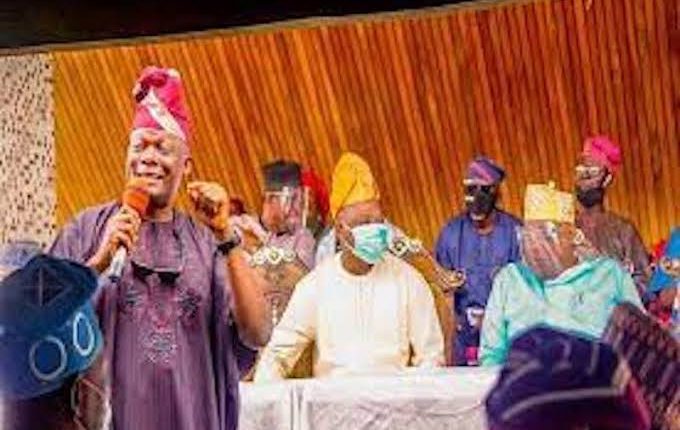 When Edmund Obilo ‘The Radio Man’ referred to the Distinguished Sen. Teslim Folarin as someone looking like a hungry hunter with a calculative brain jokingly, I laughed behind the wheel, as I was driving towards a place that can be likened to be an hunting area in one of the core parts of Ibadan, and my intuition at that point was that, will I meet Folarin the ‘Hungry Hunter’? But I am very certain that, I cannot meet him because he was not hunting at that place but Agodi Government House.

While still following up with the expository presentation of Edmund on his popular radio program, a video popped up on my phone, courtesy of one of my bosses, and it was that of the Gov. Seyi Makinde’s Park Manager System (PMS) Disciplinary Committee Chairman in Oyo State, Alh. Mukaila Lamidi popularly known as Auxiliary bragging and saying what can be likened to a death threat to the ‘Hungry Hunter’ Sen. Teslim Folarin.

But can a hungry hunter like Teslim Folarin be hunted by the PMS boss in a way he is practically describing? I am still looking for an answer to the question, even though the PMS boss is having a case to answer tactically anytime if a formal petition is laid to the security agents about the circulating video.

To me, such threat and daring video cannot just pop up; there might have been something forcing the PMS boss to act unconsciously and out of his moral sense to make that implicating video, and loosely allowing it to slip to the general public. What is wrong? Why is Auxiliary after the life of 2023 APC Gubernatorial Candidate in Oyo State?

Still looking for the main reason why Auxiliary was prompted to have, out of his right-thinking sense, committed such a liable offense resulting from his high sense of illiteracy, I jammed a conversation along the line, it was centered on one thing— he is reacting to an event of recent time, and what is that? As reported from a chat with a commercial motorcyclist, recently, Sen. Folarin and his team went to Monatan area of Ibadan by relating with people around the area, and later went to Alakia-Isebo, the assumed base of Mukaila Auxiliary and where a hotel said to be owned by Mukaila Auxiliary is located. He interacted with people around there for a while before zooming off. And of course, the areas visited are part of the senatorial district Folarin is representing presently.

If the above events are true, then, we can begin to conclude that, Sen. Teslim Folarin’s priority is wrong and inappropriate, as he took the PMS boss more serious than the reconciliation process of his crumbling party in the state that is begging for attention as it threatens his political ambition.

But for crying out loud, is he in the class of Auxiliary to be hunting him around? Sen. Folarin should have left him, Auxiliary to his position inasmuch he is not stepping on his toe for any reasons, and as a stakeholder and political candidate in the state, I am not too sure if it can be said to be okay for him to be routing Auxiliary dominated areas unnecessarily as that is like daring the non-existence assumed-to-be state actor, even though it belongs to the senatorial district coupled with his freedom of movement.

But it is sad that, Sen. Teslim Folarin invited this ridiculous acts from Auxiliary from the day he made him more relevant via his declaration speeches before the party primaries then. And in all, he should be bothered about the ‘Pakute’ set up for him by the moving Accord accordingly and the bulls of the GSMists as the re campaign draw near.

Anyway, Sen. Folarin should take a clue from the popular Yoruba saying, “Ki elepo o yago, fo’ni yangi”, because ‘Oni yangi has nothing to lose, unlike the elepo’.