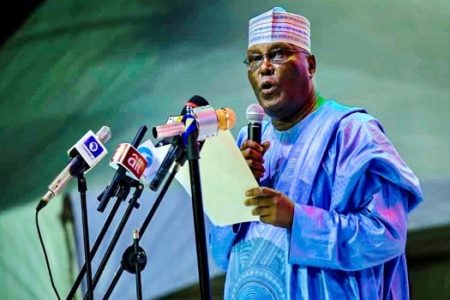 Former Vice President Atiku Abubakar, who spoke at the National Executive Council (NEC) meeting yesterday, canvassed the retention of the PDP presidential ticket in the North.

He recalled how he shunned pressure from former PDP governors to contest for the 2023 presidential ticket to frustrate the re-election bid of his former boss, ex-President Olusegun Obasanjo.

Atiku, who was the presidential candidate of the PDP in the 2019 election.

He cautioned that the position taken by NEC on the zoning controversy would determine the fate of the party in the 2023 election.

He said: “The decision of NEC today will either see the PDP into the Villa (Presidency) in 2023 or not. Since inception, this party has faced serious challenges, and has risen above sentiments to solve those challenges and move forward”.

On why he resisted pressure to contest the 2003 PDP presidential ticket with Obasanjo, Atiku said: “Now, let me come to historical events, which I said I was going to cite. Those of us who served in the Constitutional Conference, which drafted the current constitution of Nigeria should remember that after we finished drafting the constitution, we all met as members of the constitutional conference and resolved to correct the injustice that was done to a particular part of this country.

“And we said, in whichever party you found yourself, your presidential candidate must come from the Southwest, because Abiola (Chief Moshood Abiola) had won election (June 12, 1993), but it was annulled. Not only was he annulled, he (Abiola) was killed.

“So, we all agreed as members, and we went out of the constitutional conference and we formed our parties. Those of us who formed PDP formed PDP, those who formed AD formed AD.

“At the end of the day, two parties, emerged. PDP picked General Obasanjo and AD picked Olu Falae. All of these showed that Nigerians had a sense of fairness”.

Atiku had asked Professor Jerry Gana, who sat not too far from him at the NEC meeting to corroborate his story by asking: “Gana, “is that not not what happened?”, to which Prof Gana replied: “More or less”.

Atiku said: “In 2003, all the PDP governors met at the Villa and said they were not going to support President Obasanjo for a second term, that I should run.”