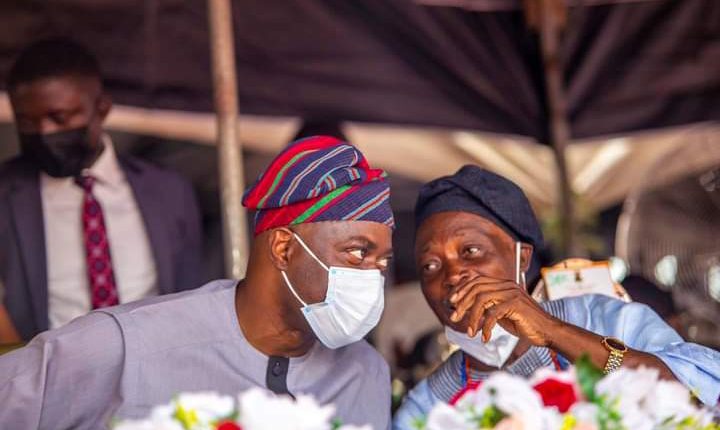 “Some people came to me to say that this person needs to be punished by the government” Governor Seyi Makinde opened up at the 7th Omituntun Ramadan Lecture which had former Governor Rashidi Ladoja and Professor Afis Oladosu (Guest speaker) in attendance, “my final word on that is that tenderness and kindness are not a sign of weakness. In fact, some people have approached me to say that Oyo state needs someone who can rule with iron hands”.

Perhaps, for a state Governor to utter those harmless, vulnerability loaded words is a public display of originality and authenticity at best. Such utterances is a sharp departure from average Nigerian Politician’s assaults, insults — and outbursts when pressed on existential issues. This gentle approach to both Governance and Politics might be somewhat off kilter in the face of constant and relentless propaganda and provocations that chew quiet and reserved people and spit them out of winners take all power play. But that’s not all.

“I apologise”, the Governor chimed in “but I don’t lead with force because I believe that if we apply calmness and gentle reasoning to every challenge we encounter, it is actually a manifestation of strength and resolution and that is the only way that what belongs to each and every one of us will get to us”.

The perception that vulnerability is weakness is the most widely accepted myth about vulnerability and the most dangerous” Brene Brown writes in her best selling book, Daring Greatly “when we spend our lives pushing away and protecting ourselves from feeling vulnerable or from being perceived as too emotional, we feel contempt when others are less capable or willing to mask feelings, suck it up, and soldier on”.

As I was compiling my findings on Oyo TESCOM misadventures penultimate Saturday, one of my interviewee reminded me of the Governor’s emotional approach to issues. He said His Excellence has never shy from showing his touchy-feely nature even in Public — and that his quiet, reclusive nature is the reason that recruitment is being foot-dragged for the umpteenth time. Of course, there are saboteurs in almost every facets of life but flushing them out of Government for instance, requires a bit of high handedness or a change from being cool to being totally uncool.

In my last week column, I concluded with a quote from Susan Cain, author of the best selling book titled, surprisingly, Quiet: The Power of an Introvert in a world that can’t stop talking. Among other heart melting nuggets packed in that book, I extracted one that says: “There is zero correlation between the best talker, and having the best ideas”.

I made reference to that quote because of the recent political spat between the Governor and ex Ekiti state Governor Ayo Fayose over PDP leadership tussles in the South West. As personality types show, Mr. Fayose is a typical poster child for the extroverted world: the world of gregariousness, and assertiveness while Governor Makinde represents that reflective, and careful and adaptive person who takes time not just to talk but also to act.

In a world of fiery, fearless and fierce politicians, Governor Seyi Makinde’s easy-does-it approach to Governance and Politics is by far an ideal that continue to beat every stretch of imagination. “But we make a grave mistake to embrace the Extrovert Ideal so unthinkingly” Susan Cain says “Some of our greatest ideas, art and inventions — from the theory of evolution to van Gogh’s sunflowers to the personal computer — came from quiet and cerebral people who knew how to tune in to their inner worlds and the treasures to be found there”.

Apart from the spate of farmers herders clashes in Ibarapa which took the Governor time to respond because one other trait of Introvert is “their slow and deliberate approach to issues”, two things have stand the Governor out since his election: openness to suggestions, (one example is the security summit with Monarchs across the state on the menace of herdsmen which was the brainchild of Professor Adeolu Akande, NCC chairman). The other is the readiness to put himself on the line.

In a similar vein, these rare traits are also not with the other sides: when you speak to people in language they understand, you are susceptible to attack from people who felt you are not acting Political enough or blamed for not sticking to your guns or for coming out publicly to tell people you can’t trade your originality and authenticity for a pot of porridge. “Staying real” says Brene Brown in the Gift of Imperfections “is the most courageous battles that we’ll ever fight”.

Being open and vulnerable, as demonstrated by the Governor implies people will always be quick and swift to look out for missteps, infractions and malfeasance of the administration and show where shoe pinches the common folks which sometimes always come in form of vitriolic rhetoric, scalding backlash, incendiary vituperation and wide condemnation.

Indeed, the step aside notice given to Professor Ologunde Michael Olufisayo of LAUTECH and the heated conversation that decision generated is a textbook example of breach of openness and transparency and due process. That shady, secretive and single-handed order is a mark of arbitrariness waiting to be formed. Further is the demolition of BCOS staff quarters by the state Governor this week. In what started as a rumour, that demolition is the lowest the Government can go in championing people’s welfare and well-being. These kind of decisions shrouded in secrecy gives room for rumours and damaging propaganda which may put the Government in bad light than its supposed.

What started as rumors and later confirmed by bulldozer has a long damaging effect on the perceived sensibility and sentivity of the Government to people’s plights and pains, and when people to the wall, people will react. In other words, being an introvert, as Susan Cain puts it, or daring greatly by living with courage, compassion and love as Brene Brown admitted does not take away being proactive as Stephen Covey captured it in 7 Habits of Highly Effective people or being highly sensitive to critical issues that make or break promise as Elaine Aron declared in Highly Sensitive Person.

“Far from being an effective shield”, Brene Brown admitted “the illusion of invulnerability undermines the very response that would have supplied genuine protection”.

Your Intervention On The Planned Conversion Of An Expanse Of Land And Parts of the Staff Quarters of the BCOS to (GRA) Is Needless, Uninformed, Half-Baked And Irresponsible—Taiwo Adisa Blast APC