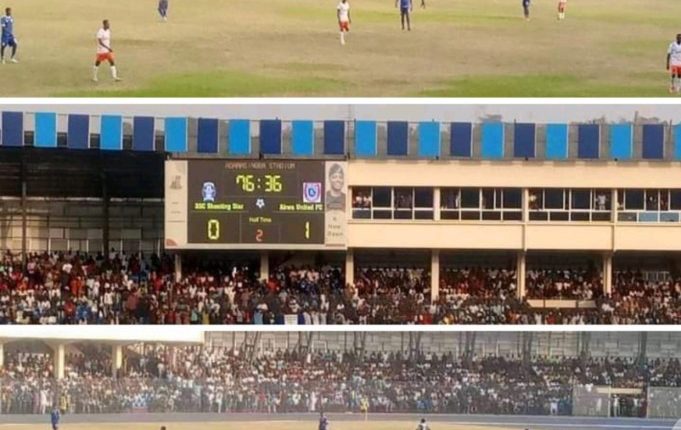 September 1, 2021 was the day I dropped a write-up here entitled: “GSM: AUDIO PROMISE TURNS REAL”. My intervention was meant to celebrate the refurbishing and remodeling of Lékan Sàlámì Stadium, Adámásìngbà, Ìbàdàn. It was the highly commendable handiwork of amiable Governor Ṣèyí Mákindé, GSM. Who no like beta tins?

I personally appreciated the fact that having been treated like it doesn’t matter, that soccer arena wore a pleasing look for the first time in over two decades. I did that appraisal as a sport enthusiast, a sport participant and as a journalist who had left Lagos many times to cover matches at the stadium. So, for me, it was a project worth giving a positive attention.

However, the anti climax descended on me same day. The lush greenery grass which looked well cultivated and luxuriantly grown became the shame of the official reopening on the night of September 1, 2021. What an awful sight! The heavy downpour of the night assured the people that between the Oyo State Government and the project contractors, something must have gone awfully wrong.

The grass lost its name, its shine, its colour and its quality like a rose trampled on the ground. The ceremonial friendly match between Shooting Stars SC and NK Tabor Sezana of Slovakia was more of a water polo than football. It became a game for ball joggers who had to raise the ball above the flood plane in order to play it. It was a tough game for our Oyinbo visitors who couldn’t play the European style of football they were used to. But trust the Olúyọ̀lé Warriors, they told the world what it means to be accustomed to certain tough conditions in sub – Saharan Africa. That’s why they easily put four goals past the visitors. All these happened with full live coverage by Super Sports. Disgusting!

Unfortunately, many ardent lovers of GSM (including some of my professional colleagues) said a flooded pitch was nothing unusual, arguing that “it also happens” in “so-called” advanced countries. Of course, they were right to a very minute extent. I won’t waste time arguing about that because some of them deliberately engaged selective perception just to remain consistent with their preference for partisan party politics or pecuniary agenda.

Trust GSM, he didn’t deceive himself nor the people. He promised to correct the clear errors that brought the embarrassment if the night. The contractors also promised to rework the pitch, though after some initial showboating about their pedigree.

So, between September 1, 2021 and now, what has changed? Nothing! In fact, if the rains should drop now….

When I returned to Adámásìngbà stadium on the 7th of December, 2021 to watch the final of GSM Pre Season Tournament between Shooting Stars and Housing Corporation, I saw a dry, dusty colourless and lackluster grass. The ground was also harder. After interacting with those who should know, I was told that there’s no water in the entire arena. A guy even said they had to buy water to wet the ground about a week to that tournament. Of course, the water purchased couldn’t surfice.

Myself and some genuinely concerned professional colleagues had hoped that before the NPFL season starts there would be an improvement but you can judge from the pictures here. All we saw yesterday (December 26, 2021) when Shooting Stars locked horns with Akwa United were a dusty pitch, dry grass, a grass without shine nor sparkle and an uneven surface (as testified to by some players from both teams).

If the playing surface is one of the major elements a stadium worth its name should have, the current Lékan Sàlámì Stadium, Adámásìngbà must be given a more quality attention. No doubt, the spectators enjoyed the general scenery (minus the pitch). But if games must be enjoyed via TV or just for the optics, something must change for the better.

It’s good that the contactors are still around. Let GSM mount pressure on them to stop messing him up and taking Oyo State people for a ride. And, if maintaining natural grass would still be herculean, let’s return to our used-to astro turn. I see no shame in that. And for those saying Ìbàdàn must host international matches, I salute your love for Oyo State. However, please note that GSM still has some ground to cover in the state, generally speaking. He shouldn’t be encumbered with this single project.