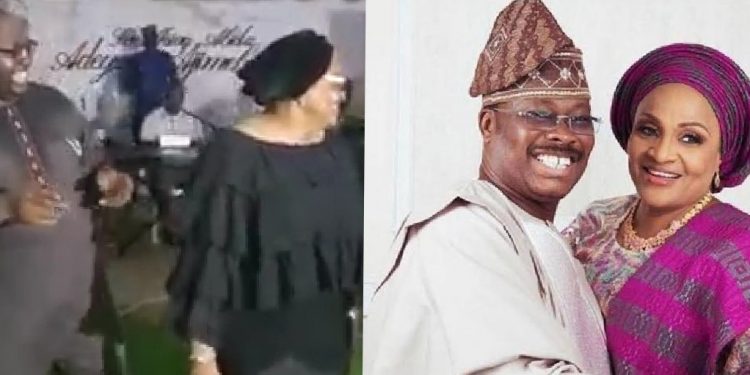 The governorship candidate under APC in Oyo State writes to reacts to mischiefs associated with the video saying that the dancing moment which was quite brief actually took place at the reception and victory party organised for Oyo ALGON members few days after their victory at the supreme court, contrary to what was insinuated in the viral video.

Read details in the statement below;

Re: Viral video of my dance with Dr. (Mrs) Florence Ajimobi

My attention has been drawn to the video of my short dance with our respected former first lady, the widow of our late mentor and political leader, Dr (Mrs) Florence Ajimobi

I want to condemn in its entirety the negativity and mischief being associated with the viral video. Any right thinking individual suppose to be happy for our mummy, seeing her in that mood for the first time in almost a year after the transition of our great leader and former governor of Oyo state, Senator Abiola Ajimobi. This great virtuous woman stood by her husband through thick and thin while alive and mourning him for a whole year is also unprecedented. We believe she deserves to be happy again.

Having thanked the former first lady for the well organised party and commended her for standing by ALGON all through the trial period, the memory of our late leader resuscitated through praise singing by our regular musician on the bandstand, Wole Ojo. At this moment, some of us chose to dance to the music to honour our late leader. At the height of the dance, we decided to draw out Mrs Ajimobi to join us on the dance floor because we believe she deserves to be happy again, having mourned for a whole year. After so much persuation, she eventually succumbed to our pressure and chose to do a brief dance with each of us in turns. We were all happy for her seeing her in that mood for the first time in almost a year. She can not mourn forever. I’m therefore appalled that these mischief makers singled out only my dance with her and decided to circulate it.

I personally do not see any big deal in this short video as all of us will die one day and will be remembered for whatever we stood for while alive. Senator Abiola Ajimobi died a fulfilled leader and great achiever. He died at the age of 70years with children and grandchildren surviving him. He died as the only two term governor of Oyo state with visible landmark achievements that will remain reference points in years to come. So, dancing to his praise singing that brought back a good memory of him a year after is in order and not in anyway condemnable. There is no gainsaying that several funerals of even younger and less achieved personality were done with bigger funfair within 8days or at most 41days of their passing away. So, let’s not be hypocritical. It is one year after the passing away of our heroe by next month, why shouldn’t we celebrate the life of a great achiever.

Therefore, i see this mischievous circulation of the video as unnecessary distraction and plead that we should all ignore whatever negative insinuations being made out of this to dent the image of personalities involved. The one year anniversary of our great mentor and leader will be a celebration of life of a great achiever and will be devoid of any trace of mourning.

Thank you and God bless.