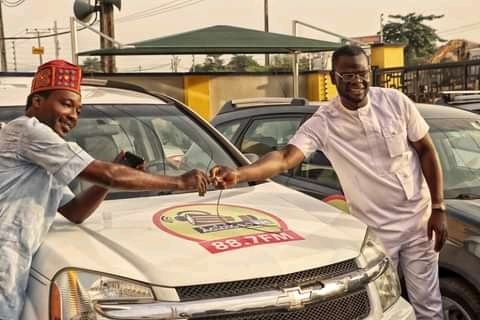 Barely two months after official commissioning of Agidigbo 88.7 FM, a private radio station in Ibadan, the management of the station has rewarded some of its staff with brand new cars.

The founder of the station, Mr. Oriyomi Hamzat handed over the cars’ key to each of the four rewarded staff members at the premises of the station located at Rainbow, Iwo road – Ojoo expressway.

This was made known via the official social media platform of the station on Facebook today 1st May, 2021. The post reads in part “Today we handed over four vehicles to four of our members of staff in appreciation in appreciation of their contributions to the growth and development of Agidigbo 88.7FM”

The post gave reason for gifting the four members of staff the brand new cars in this caption “This is in testament of our resolve to ensure that no other radio station becomes as desirable to work in as ours.”

Concluding the post, it reads “We are committed to building a workspace where every individual contribution is noted and duly appreciated. Congratulations guys!

BUSTED: University Student Caught During Attempt To Use His Roommate For Money Ritual (Video)