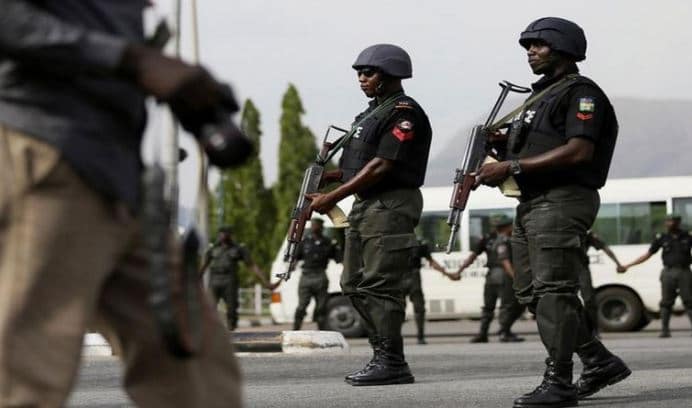 Oyo state Police Command has said that contrary to reports making the rounds, it responded to distress call from residents of Alafia Estate, Ojoo area of Ibadan on Monday, May 31, 2021, at about 3am, when it was invaded by hoodlums, by sending a team of operatives to the area to restore normalcy.

This was in reaction to the news that there was no intervention by the police during the presence of armed robbers in the estate, from where they dispossessed the residents of their belongings, while Point of Sale (POS) machines were used to withdraw money from their accounts.

Clarifying the issue in a statement on Tuesday, June 1, the command’s Police Public Relations Officer, DSP Adewale Osifeso, said that contrary to the news that was spread, the police team was at the scene when informed, and that the hoodlums fled when they became aware of the operatives’ presence.

Osifeso stated that some exhibits, including a pistol, three cutlasses and a bag containing both male undergarments and SIM cards, suspected to be property of residents, were recovered.

He said: “The command wishes to refute this news targeted at crippling the effectiveness of the police in that axis and in the state by intimating the general public with facts of the incident as thus:

“In response to a distress call received in the early hours of Monday, 31/05/2021 at about 0300hrs by residents of Alafia Estate, Ojoo area of Ibadan, a team of operational and intelligence assets were swiftly deployed to the area to restore normalcy.

“On sighting the police, the hoodlums hurriedly fled the scene, leaving behind in the process, a pistol along with 3 (three) cutlasses and a bag containing both male undergarments and SIM cards suspected to be properties of residents.

“Investigations are actively ongoing to apprehend the culprits and as well crackdown their criminal chain.

“The Commisioner of Police wishes to assure the good residents of Alafia Estate and Oyo State as a whole that the Command will not relent in its mandate to provide comprehensive and adequate security coverage for all and sundry.

“However, she enjoins all to imbibe the culture of providing the police with timely and accurate information useful in fueling the course of birthing a peaceful Oyo State of our collective dreams.”

He advised that during cases of emergency, residents should reach the Command promptly through emergency control room number 615 which is toll free (Oyo State Security Trust Fund), and those of the state command emergency lines which are 07055495413 and 08081768614.

The PPRO added that the ‘NPF Rescue Me’ app is also available for free download on both Android and Apple IOS, for Android and iPhone users.