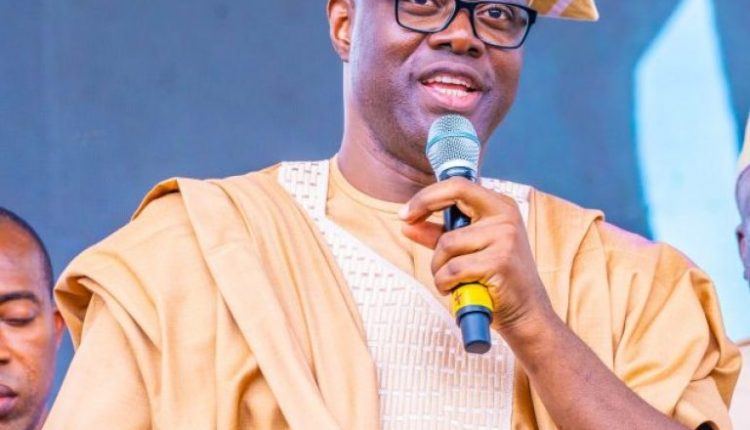 Governor ‘Seyi Makinde has revealed that the late Alaafin of Oyo, Oba Lamidi Adeyemi III was one of those responsible for his victory in 2019, through his honest posture.

Makinde said this on Saturday at the final burial ceremony of the late Monarch who died on Friday, April 22nd, 2022, at the age of 83.

The state governor who denied that he had a tensed relationship with the late monarch disclosed that, “Baba was an encyclopedia of history and culture in Yoruba land.

“Today, I can only say to you my people in Oyo town and Oyo State, yes we lost a man, a King that is irreplaceable but we have to accept God’s will.

“Kabiyesi obtained mercy from God because it is not easy to spend more than 50 years; half a century on the throne if God is not merciful to him.

“In 2015 when I came out to contest the governorship seat, everywhere I went, most people were not honest with me. Kabiyesi was among one of the few people that told me the truth.

“One night, I came to meet the king. Kabiyesi said Seyi, this thing won’t work out and he told me why.

“He said I didn’t have the required structure. If you need to get info in Saki right now, you’ll be the one to run to Saki and get the information you need. To become a governor, he told me that I needed to have a structure consisting of people I trust, people I can reach out to in all the zones and towns in Oyo State for information and would provide credible information to me.

“I told him that I’m already in the race and when the election came, I lost. But it is in my record that among the few people that told me the truth in 2015, Kabiyesi was one of them.

“Then, when God answered my prayers and I became the Governor, one night I came to Baba for advice. Baba took me down memory lane of how things were done. I asked him how he knew all of these things. Baba asked me if I know for how long he has been on the royal seat as a king”, he stated.

Responding on the selection of a new Alaafin; Gov. Makinde said, “It is a celebration for us today and I want to use this opportunity to let our people in Oyo know that the process to select a new Alaafin will not be beyond the declaration on the throne. People have come to me to say that the first Alaafin had 13 children and only 2 are recognised so this is an opportunity to bring in the others. I asked them a simple question, is it in the declaration? They said it is in one declaration that was supposed to be done but was not signed. I told them that since it wasn’t signed, the signed declaration will be used to select a new Alaafin”.

He thereafter ended his address by recounting his response to an earlier media chat probe which he got on the death of many kings in Oyo State during his administration.

“I asked them if they wanted me to die before the aged Kings”, Makinde remarked.

Despite Tendering Apology Letter, APC Moves To Punish Tinubu Over Outburst Against Buhari