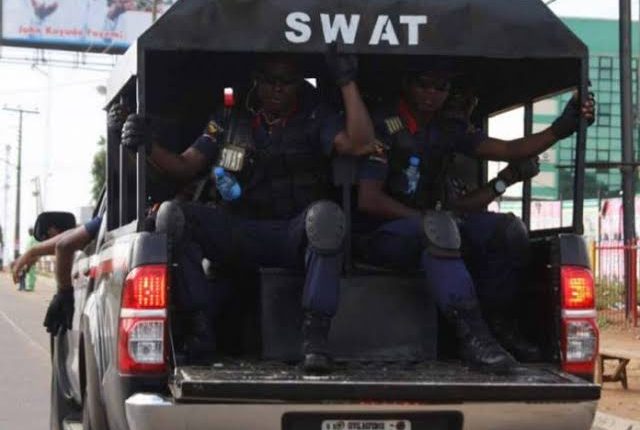 It was sad morning as petty trader, Mrs Funmilola Adekoya lost her three month-old pregnancy as a result of an alleged brutality melted on her the personnels of the Nigeria Security and Civil Defence Corps (NSCDC) in Ibadan.

Mrs Adekoya was said to have been attacked on Sept. 29, at Floor2, Gbangbalolonwa complex, Idi-Ope, Imonlefalafia, Oke-Ado Ibadan when the operatives of NSCDC came to her shop to demand for #2000 as tax payment.

Mr Francise Adekoya, the husband of the victim said that some people without any means of Identificaton just entered his shop early in the morning demanding for N2,000 tax. He added that he however pleaded with them to come back since he hadn’t made sales but instead of them to heed to his plea,an unnamed NSCDC operative dragged him down and pressed an electrical gadget and spraying him with a gaseous substance that led to temporary lost of his sight.
,

“When the men who were guarded by two NSCDC operatives entered by shop, they claimed to be collecting N2,000 tax for the Oyo State Board of Internal Revenue.

“However, I made them understand that I had not made any sales that morning, besides, there was no pre-notice of their coming and so did not prepare any money ahead.

“I pleaded with the alleged tax collectors to give me some hours to make money, probably by afternoon I would have made money, but they threatened to apply force against me.

“Then, they insisted on silling up my shop and I tried to prevent them.

“One of the NSCDC operative later dragged me out of the shop, injected me with an electrical gadget and also sprayed my face with a gaseous substance,” Adekoya explained.

The husband of the Victim alleged that his Wife, who was three months gone, tried to prevent such dubious act of the NSCDC operatives, but instead of yielding to plea, they applied the same substance and she fainted.

“It took the effort of well meaning neighbours who supported me in rushing her to the hospital before she was revived.

“The medical Doctor told me that it was only God that saved her adding that she has lost the three month-old pregnancy she was carrying.

“As I speak, she is still receiving treatment in the hospital and I have no money to offset the heavy bill incurred.

“I want the government to take a decisive action on this incident because the brutality against poor innocent people might continue if nothing is done on it,” Adekoya said.

Speaking in an interview with reporters in Ibadan Mr Oluwole Olusegun, the Public Relation Officer (PRO) of NSCDC in Oyo State confirmed the incident and that the corps was still investigating the matter.

Reacting to this Incident, Mr Taiwo Adisa, the Chief Press Secretary (CPS) to the Oyo State governor said that the incident was condemnable.

He further said that for the past one year of Seyi Makinde’s administration, the task of revenue collection had been given to a private company to undertake on behalf of the government.

Adisa therefore called on residents to be well informed on who they must pay tax to.