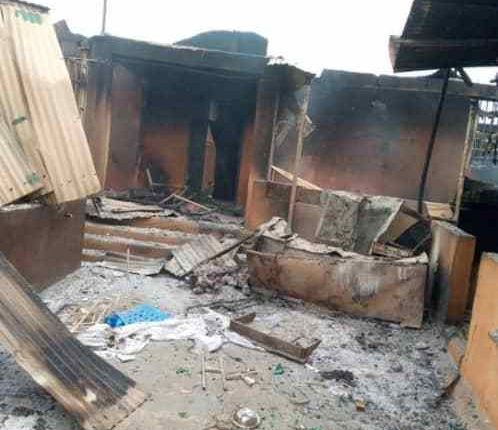 In a video obtained by Mouthpiece NGR, two cars, five motorcycles and other valuable items were burnt during the incident.

It was gathered that Prince Oyekunle Ade Master and his family members have fled the town to avoid being attacked by angry residents who accused him of being the brain behind all the criminal acts in the town.

Recalled that few werks after the abduction of 9 people, a 40 years old son of chief imam of Ajaawa was murdered and there was an attempt to kidnapp another person last week.

Ade Master’s number was not available and his whereabout was unknown at the time of filling this report.

Speaking on the incident, the executive chairman, Ogo Oluwa local government,Prince Oluwaseun Ojo said effort is on top gear to prevent degeneration of the situation.

Ojo who hinted that he had briefed appropiate quarters on the development also appeal to the angry youths to shelve their sword and allow government to investigates the matter.

The Alajaawa of Ajaawa, Oba Thompson Adeyeye Akanmu Oladele called for quick intervention of state government to declare curfew in Ajaawa to prevent entry as from 7pm till 6am.

Operatives of Operation Burst who visited the town were prevented to take the corpse of Oluwajubee from the scene.

It was also gathered that 7pm- 6 am curfew has been imposed in the community.