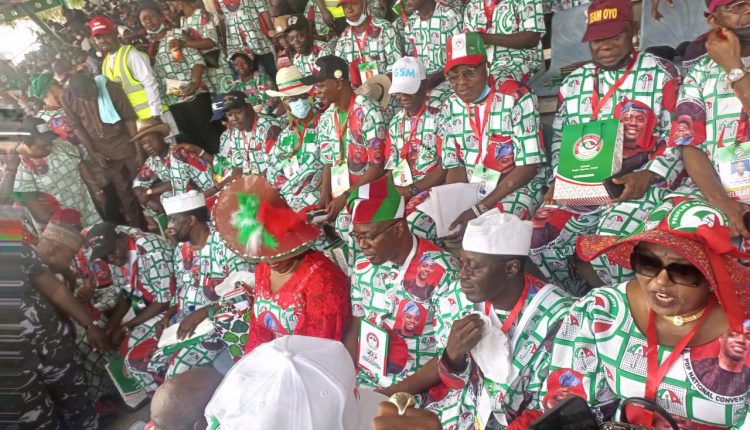 Arapaja Emergence Will Breath Unity As We Begin Our Journey To Rescue Nigeria—ILAKA Congratulates Arapaja, Makinde

The immediate Past Chief of Staff to the Oyo State Governor Chief Bisi ILAKA has congratulated the newly elected Deputy National Chairman South, Ambassador Taofeek Arapaja and Governor Makinde for the Success recorded at the just Concluded Convention held at Eagle Square, Abuja.

In a Press Statement made available to AKÉDE Ọ̀YỌ́ the Oyo Central Senatorial Hopeful describe the Victory of Ambassador Taofeek Arapaja as ‘Unity of Purpose’ Saying it’s time to unite every members as we set to rescue Nigerians from the mess the All Progressive Congress has put this country into in the last 6years.

The Ladilu of Oyo kingdom urge the former southwest PDP Chairman to see his victory as a victory for all, adding that no victor no vanquish, as the major aim is to dialogue the ill fated APC out come 2023, no looser as this is just a litmus test that is bound to happen in a democratic settings. Having pulled a total votes of 2004 as against his close challenger the former Governor of Osun State Prince Olagunsoye Oyinlola who garnered a total of 705 votes, It’s the call for Unity of Purpose by our Party Leaders that make this historical journey possible he said.

Chief Bisi ILAKA also appreciate Prince Olagunsoye Oyinlola, a former governor of Osun State, for demonstrating the essence of participatory democracy, adding that sometimes we some while we sacrifice others for the greater Unity of our Party.

I Urge you to use this wonderful Position to unite, foster more synergy to Oyo State PDP in ensuring that all aggrieved members return back to our party, with this well be magnanimous in future victories, Spread your arms wide enough for all members to be accommodated. Together, Stronger, United we will rescue Nigerians.

ILAKA also use the opportunity to extol Governor Makinde’s insight, Brilliance and Leadership qualities in achieving one of the best convention in recent times serving as Secretary of the just concluded Convention Committee, As our leader you’ve lead us well, while selling Oyo State to the world with your leadership display at the convention, more grace, more wins as you lead us right.

Chief Bisi ILAKA urge all newly elected National Executives Ably led by the for Senate president Senator Iyorchia Ayu to see this opportunity as a Clarion call, A step in many as we begin the journey to rescue Nigerians from the maladministration of the APC in Nigeria, Saying the Stage is set, it’s time for us to stand firm as one united family as we Wilder the ill fated, worst ever admiration Nigeria has ever had.

All Is Set For November 27 As Oyo Speaker, Ogundoyin Set To Wed His Heartthrob Miss Olamidun