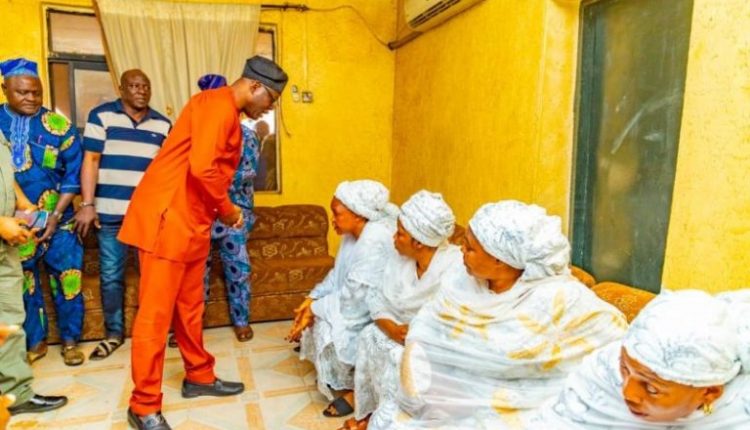 ‘Seyi Makinde, governor of Oyo State, on Thursday, paid a condolence visit to the family of the late Aseyin of Iseyin, Oba Abdulganiyu Adekunle Salau, stating that the late monarch loved and worked for Iseyin’s development with all his might.

Makinde, who stated this at the Aseyin’s Palace, where he was received by Iseyin Chiefs, family members of the deceased monarch, chairmen of the 10 Local Government Areas in Oke Ogun, said that the state government would give the late Aseyin a befitting burial.

A statement by the Chief Press Secretary to the governor, Mr. Taiwo Adisa, quoted the governor as adding that Oba Salau’s death was a personal loss to him, as he was a partner in the progress and development of Oyo State.

According to the governor, Oba Salau left a good legacy and did wonderfully well for the development of Iseyinland and Oyo State in general.

He pledged his continuous support and assistance to the children and widows of the late monarch, stating that whether or not he is in office as governor, he would ensure that the monarch’s family members are taken care of, as a personal friend of the late Aseyin.

He said: “I greet the entire people of Iseyin and Oyo State on the transition of our Kabiyesi, the Aseyin of Iseyin.

“A lot of people may not know that Kabiyesi and I were very close. In my assessment of him, I know he loves Iseyin more than what anyone can imagine. I will like to share two examples to validate my claim.

“When we were still thinking about the Iseyin to Ogbomoso road project and its economic benefits, I called Kabiyesi’s attention to it. I made him know we had critics, who would criticise the economic benefits of the road. But Kabiyesi told me that his forefathers passed through that road to found Iseyin, and that if it does not have economic benefits, it definitely has historical and cultural benefits to Iseyin people.

“Secondly, less than two days before Kabiyesi passed on, the document for the land where LAUTECH was situated was given to Baba on the sick bed and he signed it. The document was sent back to LAUTECH, the Pro-Chancellor and his team then went through it and noticed an error, which was corrected and returned to Kabiyesi in the hospital. Baba signed it less than 24 hours before he joined his ancestors.

“So, I can say that it is not only the people of Iseyin that are bearing the loss of Kabiyesi, it is a personal loss for me as a governor, because Kabiyesi was a partner in progress. So, I like to console all of us on this.

“But we are happy for one thing – Kabiyesi ascended the throne of his forefathers and fulfilled the number of years God destined. I am also glad that his reign brought growth and development to the people of Iseyin.

“So, we need to keep thanking God that he represented Iseyin well in Oyo State and Nigeria as a whole.

“As a government, I want to assure you that we will give Kabiyesi a befitting burial and I also want to say that inasmuch as I am still the governor, I will not abandon the wives, princes and princesses the late Aseyin left behind.

“To the kingmakers, I pray that may God endow you with the needed knowledge to appoint the new king that will continue from where the late Kabiyesi stopped.”

In his welcome address, the Ikolaba of Iseyinland, High Chief Ismail Omotoso, thanked Governor Makinde for his financial and moral support for Oba Salau, when he was on the sick bed.

He added that the governor did everything possible to keep the Kabiyesi alive, but that it pleased God to take him, stating that the entire people of Iseyin were grateful to Governor Makinde and the Oyo State government.

“On behalf of the chiefs and people of Iseyin, I welcome Your Excellency and your entourage to Iseyinland.

“The people of Iseyin would have me appreciate you for everything you did when Kabiyesi was ailing. You tried your best to keep him alive but it pleased God to take him and there was nothing we could do.

“Your Excellency, the people of Iseyin are grateful for everything you have been doing; every positive development we expected for many years have come to us through you.

“I want to assure you on behalf of the people of Iseyin that the votes you recorded in the 2019 election will be a child’s play beside what you will get in 2023.”

Similarly, the chairman of Iseyin Local Government, Mr. Muftau Abilawon, welcomed the governor, expressing words of appreciation for his efforts in developing the historical town.

He, equally, called on the governor to ensure that LAUTECH students resume to the new Faculty of the Agriculture and Renewable Natural Resources for the new academic session once the ASUU strike is over.

Members of the House of Assembly from Oke Ogun area of the state as well as serving and former party chiefs at the state level were also in attendance.