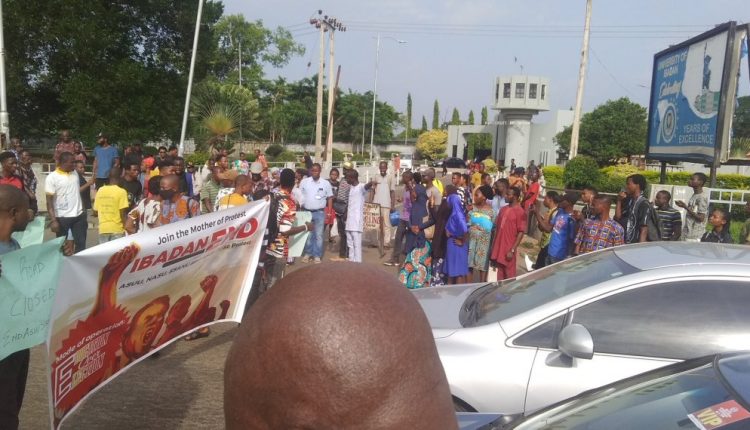 Hundreds of concerned students in Oyo State, on Friday, protested at the main gate of the University of Ibadan (UI) over the ongoing Academic Staff Union of Universities (ASUU) strike.

Speaking, a 200-level student of UI, Solomon Emiola, who led the protest, said it (the protest) was important because the students were tired of staying at home.

He said: “Our leaders have continued to play politics with our future.

“Our goal is to shut down the whole of Ibadan, until our demand is met.”

According to Emiola, the protest would be held daily, until the government gives a listening ear to the yearnings of Nigerian students who are being delayed unnecessarily.

Also, a former Chairman, Trade Union Congress (TUC) Mr Emelieze Andrew, said the protest was to awaken the spirit of students whose rights were being tramped upon by the state.

Andrew said the lingering ASUU strike was due to the negligence and failure of leadership, citing various comments of stakeholders.

But the protest took a new dimension, when the UI Students’ Union Government (SUG) President, Yinka Adewole, stopped the protesters from locking the varsity’s gate, saying that he was not aware of the protest.

Adewole said most of the protesters were not students of the institution, adding that the SUG has scheduled their own protest for May 17, to express their grievance over the strike.

He ensured that the varsity’s gate was reopened, despite the objection from the protesters.

Some of the inscriptions on the placards carried by protesters include: ‘Closing school is a treason’, ‘Education over Election’, ‘Road Closed end ASUU now’, among others.

Men of the Nigeria Police Force, Nigeria Security Civil Defence Corps and Nigerian Army were were on ground to forestall the breakdown of law and order.

Over 3,000 Apply For Environmental Health Officers Job In Oyo