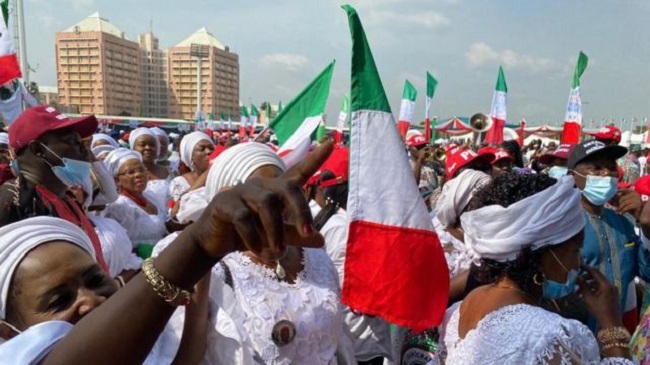 •Beg Nigerians for another chance to reset country

PROMINENT leaders of the Peoples Democratic Party (PDP), on Saturday, gave the ruling All Progressives Congress (APC) a quit notice, saying the ruling party has misgoverned the country since it took over in 2015.

The PDP leaders, who spoke in turns at the party’s national convention in Abuja, said the country had never been this bad and begged Nigerians for another chance to reset the country.

Leading the PDP stalwarts, former Vice-President Atiku Abubakar, charged Nigerians to take the opportunity presented by the PDP to set the country aright.

According to him, there are many differences, but Nigerians can achieve anything if they put their differences aside.

He said the convention was an opportunity to make decisions that would shape the future of the party for the benefit of all Nigerians.

Abubakar said Nigeria was passing through the most difficult period of its existence, saying that he is 70 years plus and had never seen the country in such a shape.

He said there was so much insecurity and social tension which were threatening the unity and corporate existence of the country.

He said the situation of the country was an opportunity for the PDP to carry out its responsibility and save the country.

“We have a chance to unite the country as we march towards achieving the dreams of our founding fathers at independence so many years ago.

“We have a chance to set our country on an enviable position in the comity of nations; we can save ourselves, we can save the party, we can save Nigeria together,” he said.

Meanwhile, potential PDP presidential aspirants used the opportunity provided by the convention to engage in early test of popularity as they bid to gain an early advantage ahead of the 2023 election.

Former Gombe State Governor, Ibrahim Dankwabo and former Senior Special Assistant to the President on Public Affairs, Doyin Okupe were also among some of the projected aspirants who tried to make statements with their visibility to the delegates at the Eagle Square, the venue of the event.

In and around the arena were flooded with posters canvassing their candidacy for 2023 as hired musicians sang their praises at different corners of the venue.

Some of the party chieftains ensured that they made a grand entry with their supporters in an apparent bid to convince delegates that they are popular.

Atiku supporters cheered loudly as he delivered his address, while Kwankwaso came late to the arena with hundreds of supporters who disrupted the ongoing event with their drumming and singing as organisers had a hard time trying to get them to settle down.

There was no drama at the convention as most of the National Working Committee (NWC) offices had been sorted by consensus, except that of the Deputy National Chairman (South). A former Senate President, Iyorcha Ayu, is expected to be ratified and announced as national chairman of the party along with others who had emerged similarly.

Before the commencement of voting, former Osun State governor, Prince Olagunsoye Oyinlola, was technically knocked off the race for the Deputy National Chairman (South) of the PDP as his name was excluded in the consensus list that emerged at the convention.

Also missing was the name of Hajia Inna Ciroma, who had insisted on contesting the office of the National Deputy Chairman (North).

Umar Ilya Damagum has been selected by the party as he was the name that appeared on the list for the position.

Before the emergence of the consensus list, only two positions of the 21 National Working Committee (NWC) posts remained to be contested at the national convention as more aspirants stepped down at the venue, according to them, in the interest of the party.

Oyinlola insisted on going head to head with former national Vice-Chairman (SouthWest) of the party, Arapaja, for the post of the National Deputy Chairman (South) just before voting began.

Also, the former woman leader of the party, Hajia Ciroma (Borno) refused to step down for Damagum (Yobe) for the position of the National Deputy Chairman (North).

The chairman of the National Convention Organising Committee (NCOC) and governor of Adamawa State, Ahmadu Fintiri, had announced that three posts were left to be contested including that of the national auditor.

However, after that announcement, Mrs Chibuogwu Benson-Oraelosi and Ikechukwu Samben Nwosu told the delegates that they had decided to withdraw from the race for Obiechina Okechukwu Daniel, in the interest of the party, which they observed is intent on rescuing Nigeria.

Following the withdrawal, Fintiri said only the two positions being contested will require agents to watch the poll as the 19 remaining posts have unopposed candidates.

He announced that a total of 3,511 delegates were fully accredited to vote in the exercise. Nigerians want PDP back in power in 2023.

Also speaking, the outgone acting national chairman of the party, Elder Yemi Akinwonmi, told delegates that Nigerians wanted the PDP back in power to address the mess caused by the All Progressive Congress (APC).

In his welcome remarks at the convention, he pointed out that the country was in a “disturbing and uncomfortable condition” while the ruling party is clueless as to what to do.

He said the PDP had done well for Nigeria before and will do it again.

He urged all party members to set aside their differences and work for the success of the party in the 2023 election.

“We all know the disturbing and uncomfortable condition and situation Nigerians are in today.

“The APC led-government is so clueless that Nigerians need a better hand to get them out of this mess. I believe we can do it as we did before.

The chairman of its organising committee and governor of Adamawa State, Ahmadu Fintiri, told the delegates that the APC has brought the country to a level that has never been seen before.

He said in his address at the event that the APC was hell-bent on bringing the country to recession on all fronts.

According to him, the performance of the ruling party has proved that Nigeria is far better with the PDP.

“For Nigeria, the present APC-led-government is hell-bent on railroading the country into multifaceted recession in all fronts; from the economy to governance; national security to diplomacy; poverty to unemployment; anti-corruption to the observance of the rule of law; citizenship to national cohesion, etc.

“Indeed, the country has never had it this bad. That Nigeria is better by far with PDP in power is not in doubt.

“We, therefore, have a duty not to disappoint our teaming supporters. We have to take back our country as we have always done.

“We have to save Nigeria. If we could force the country out of the clutches of the military, we can do this one huge task – push the people who don’t know the true definition of good governance and national coexistence out of power. This is a Nigeria rescue mission. This is the role PDP was invented to play.”

PDP set to return to control in Abuja —Tambuwal

In his remarks, Tambuwal expressed optimism that the party is set to reclaim its glory, saying that despite the antics of detractors to roll back the 16 years impressive credentials of the party, the party is still at the forefront and endearing.

He stated: “Analysts and observers agreed that there are attempts to scuttle our unity as a party and as a people. There are people working to present us as weak and in disarray. “But I am happy to report that contrary to the naysayers the PDP is today the strongest and most cohesive party in Nigeria.

“I am happy to report that those who want to divide and weaken us are the ones failing and we are winning,” the governor told the crowd.

Enumerating the problems of the country and the continent of Africa as challenges of insecurity, unemployment, rising cost of energy, food and other essential items for living decent lives,” he said the PDP as “the best platform to move the country forward” is poised to embark on intensive membership drive that will soon “welcome new members… [and] other patriots and concerned Nigerians to join us… to move Nigeria forward.”

Emphasising the need to harness the potential of young people and provision of succour to old people, he noted that “the current state of the nation is a far cry from the need of our people across the country.,” he said.