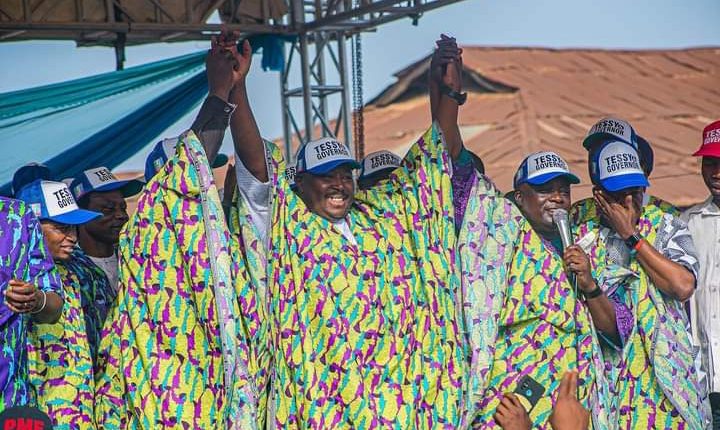 Barrister Sharafadeen Alli, the 2023 All Progressive Congress (APC) Oyo South Senatorial District candidate has highlighted the caliber and pedigree of the leaders and candidates of the APC compared to as found in other parties in Oyo State.

The legal practitioner and grassroot politician was addressing the crowd of party faithfuls and members of the general public at the APC Ibarapa zonal rally on Thursday in Igbo-Ora. He said,”I am Sharafadeen Alli, a son of Ibadan and Ibarapa. I am Ibadan on both my father’s and mother’s side. Someone came here recently and said he is from Ibadan, but let me tell you that he is not. I am Akogun of Ibadanland and I am also Maye Balogun of Ibadanland. On the stage here with me, you can see Senator Teslim Folarin who is Asaaju Olubadan of Ibadanland, Senior Chief Akinade Fijabi who is Ikolaba of Ibadanland and Senior Chief Barrister Lowo Obisesan who is Assaju Balogun of Ibadanland. I also see Chief Sina Alabi, a Mogaji. Here also is Alhaji (Dr) Isiaka Kolawole, a Mogaji. There are many men of high calibre and pedigree here. Which other party can come here and parade this many Ibadan chieftains and responsible people in the traditional settings, like our party has done here this afternoon?”

Earlier, many of those who addressed the people at the rally had extolled the virtues of Barrister Sharafadeen Alli as the most suitable candidate of all the contenders to go and represent the good people of Oyo South Senatorial District at the Red Chamber.

Erelu Funke Olayanju, in her address had emphasized the need to successfully vote in Barrister Sharafadeen Alli and the APC House of Representatives candidates. She charged the Ibarapas to set a good voting record in favour of APC, “In five month’s time, we will be celebrating and rejoicing over the victory of Teslim Folarin as the Governor of Oyo State. Let it be said that the Ibarapa people played their part. Let it be said that we did well, with a full count of votes for APC. Let’s vote Sharafadeen Alli, Ajibola Muraina and Remi Oseni because if Asiwaju is voted in without our lawmakers, things will not augur well”.

Alh (Dr) Olayinka Isiaka Kolawole, Director General, Tinubu/Folarin Campaign Council, in his address noted that the emergence of Teslim Folarin as the gubernatorial candidate of the APC was ordained by God. He went on to assert that Barr Sharafadeen Alli’s caliber and pedigree is worth more than being a senatorial candidate and he should not be compared with the others competing to serve as Oyo South Senator, “When you look at how Folarin emerged as the as the candidate of our party, you will know that it is the hand of God. So let’s follow the person that knows the road”.

He continued, “Sharafadeen Alli is worth more than a Senator, you can’t compare him to the others. In a similar manner, Jagaban Asiwaju Bola Ahmed Tinubu cannot be compared with his competitors”.