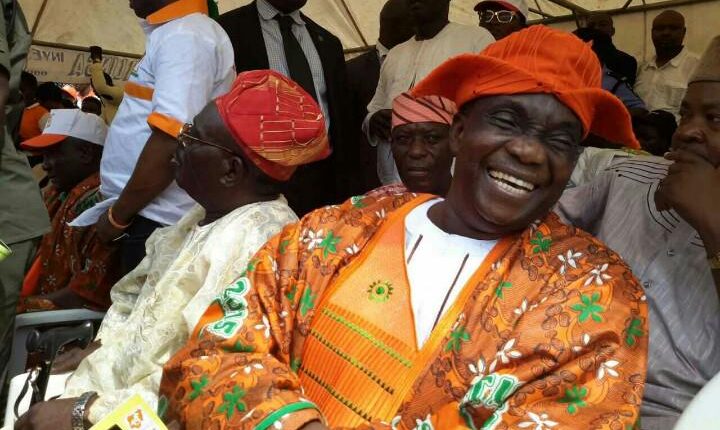 Be Fair, Honest And Ensure Equity—Oyelese Task Saraki-Led Committe Over Handling Of Disagreement Between Fayose And Makinde

A former Minister of Mines and Power and a chieftain of the Peoples Democratic Party in Oyo State, Elder Wole Oyelese has advised the reconciliation committee led by Senator Bukola Saraki to give fairness and equity priority in discharging its duties.

In a Statement made available to Newsmen in IBADAN on Tuesday

The statement reads in full:

“The current situation of things in the South West chapter of the People’s Democratic Party is a good pointer to the truth that there cannot be lasting peace anywhere without fairness and equity.

The skirmishes created by former Governor of Ekiti State Ayo Fayose that now appears like a personality clash between himself and Governor Seyi Makinde of Oyo State is nothing but a distraction from the main issue which is the marginalization of Oyo State in the Political Scheme of things in the South West PDP. For a long time now, Oyo State PDP has always been grossly short changed in the allocation of party posts and especially when it comes to the zonal chairmanship slot and we are now refusing that arrangement that is not fair to us.

“It is important to realize the PDP is currently in a precarious situation and any attempt to alleniate the only state in the zone that has a sitting Governor will end up being a costly political gamble on the part of the party.

“All knowledgeable and keen political observers in the country know the pivotal position of the South West in our national political equation. Everyone knows that whenever the South West sneezes, the nation catches a cold. This position has not changed over the years and it is not likely to change ever. It is further appreciated that the heartbeat of South West politics is Oyo State, nay Ibadan. As the capital of the old Western Nigeria, most adults know the danger of toying with Ibadan when it comes to national politics. This position of Ibadan as the Political hotbed of the South West must be recognized in the current situation as we will not accept the crumbs anymore. Fayose himself who grew up in Ibadan and has spent the better part of his life there knows this fact and one wonders why he is sticking to his current position of ceding the zonal Chairmanship to Ondo State to the detriment of Oyo State.

When Fayose was recognized as the leader of the party in the South West when in office, he used that position to influence the sharing system of party offices to favour his block i.e. Ondo/Ekiti. At that time, Oyo State was grossly marginalized and cheated and there was little we could do then.

Fayose knows quite well that we in Oyo State would expect the injustice to be remedied this time around hence his current ploy of advocating for the continuity of the previous executive committee in office. If this is allowed, it means that Oyo State has again been robbed, and this will not be allowed to happen again.

Oyo ADC: Makinde Has Fulfilled His Promise But We Are Yet To…

“One fact that sticks out like a sore finger is that there is no logical reasoning to retain the current executive in office. One can align with the saying that “you don’t change a winning team” but shouldn’t something be done with a losing one? At the inception of the current democratic dispensation, the AD (Alliance for Democracy) swept the South West in the first elections. When a new zonal executive for PDP came on board before the 2003 elections, the game changed and the PDP became a formidable party winning four of the South West states. The executive committee that performed that feat is what I call a winning team.

The truth on ground is that the current team failed to win one single state in the South West. We even lost Osun State that was a sure bet for us. Is that the kind of team to retain in office? Lets please put sentiment aside. What the South West PDP needs at this time is a leadership that clearly understands party organization and which will turn the fortune of the party around.

Our party in this zone needs serious welding together and reorganization and not factionalization that is currently going on. If the PDP is to make any meaningful impact in forthcoming elections, then a surgical operation is needed. I have nothing personal against my brother Eddy Olafeso, but the reality must be faced.

He has certainly done his best and he must be commended for his effort. However one would have expected that as an immediate past chairman, he should have avoided belonging to a faction of the party. A knowledgeable and versatile politician would have done everything to bring Makinde and Fayose to a round table to resolve the crisis. By choosing to belong to a faction of the party, he has clearly shown that he is not capable of leading the party to the big battles ahead if the PDP is to reclaim the South West.

“Our compatriots in Ogun and Osun States need to reassess the situation and appreciate the reality on ground and avoid factionalizing the party. We have very good chances of winning the two states alongside Oyo but this requires that the obvious Front Runners must dismount their “very high” horses and be humble enough to do the needful.

They should court the support and understanding of other aspirants and groups in the struggle as they should not go to battle in their respective State with disunited troops against APC incumbent governors of their States. Human beings have choices and politicians obviously want to be accorded their recognition. I sincerely advise them to reach out widely on their own as the current tactics cannot help them and our great party.

I appeal to the former Senate President, Dr Bukola Saraki who has been mandated to find a lasting solution to the crisis to address the issue of the marginalization of Oyo State and any other states in his quest to resolve the crisis. If an acceptable and equitable sharing of office is done, then a single list of officers could be produced and all other processes will be mere formality. I have no doubt in my mind that Dr Saraki is quite capable of finding an amicable solution to the problem on ground thus setting the PDP on the right track to control the South West.

“I call on all party leaders and members in the South West to exercise restraint and exhibit great maturity at these trying times so as to have a formidable party that can deliver the needed results. This is no time for abuses and name calling as it will do us no good.

“Finally I call on former Governor Fayose to please use his political dexterity to change the game in favour of the PDP. We can read the game quite clearly and it is currently not moving in our way. Fayose should allow the major knowledgeable stakeholders across the divide to sit with Dr Saraki’s team alongside Governor Seyi Makinde and his humble self to sort things out. Unless we employ the spirit of give and take, the party and the helpless members will be the biggest loosers and history will not be kind on Fayose.

“I appeal to him to put the future of the party far above other considerations and cede the chairmanship to Oyo State as we have never occupied that seat before. At the same time, the other previously marginalized states should be given their dues. This singular act of equitable adjustment of the sharing method of party positions with immediately brings peace to the South West.”