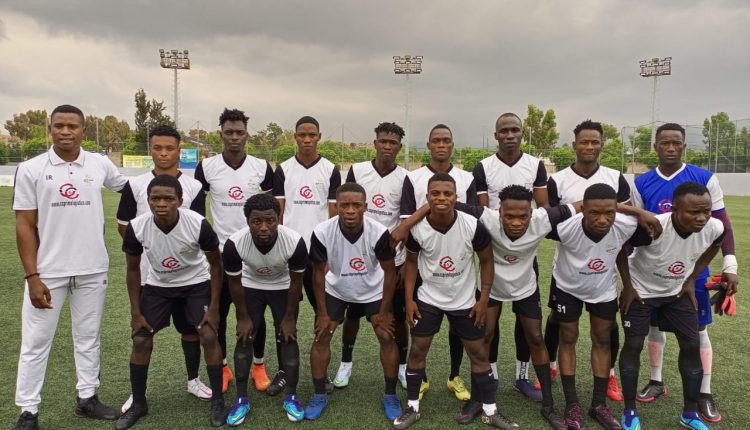 Nigerian Based Football Academy Bestowed Grace took it players to Lebanon for a football trial matches.

Nigeria Football Academy side Bestowed Grace Football Academy have made history in Lebanon after defeating one of the best football clubs in Lebanon in a test match. The match which started at exactly 4pm Lebanon local time was seen by a wide range of local spectators many who are the home fans.

Orekoya Daniel scored the first goal of the match for the Nigerian side in the 12th minute. It took the home side only nine minutes to reply bringing the score line to 1-1 til the end of first half.

Ekimie Jonah put the visitor ahead in the 52nd minute through a strike from a lost ball parried by Al Ahed goalkeeper. Afolabi Samuel scored the 3rd goal at the 78th minute after the home team have leveled the score line to 2-2 at the 71st minutes. The game was closed with a late winning goal from Oyebode Segun who placed the goalkeeper on the goal post edge to bring the final score to 3-4.

In Another encounter with Shabab Al-Ghaziah, the Nigerian team put up another cintilating performance to defeat their host team by 1—2 at the home ground of Nasir Football Stadium.

The team director Mr Ismail Ayomide Ridwan in his reaction said, though it’s a test match but our players are in high spirits, we’ve had few changes in our management, the results shows that we are getting it right, while we enjoy the euphoria of these games, we will ensure that our focus in developing the best talents continues.

We decided to play international matches to shape our players mind, and to show that we’ve put a lot in place to ensure that our academy breeds the best, he concluded.