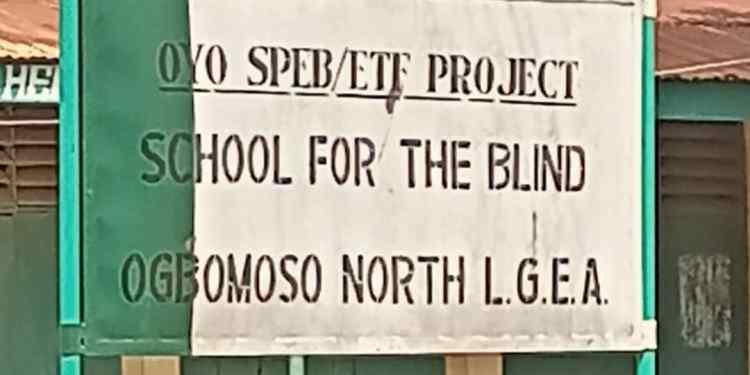 A visually-impaired student of the Nigeria Training Centre for the Blind, Ogbomoso, Akeem Sulaiman, has been suspended indefinitely from the school hostel.

The state government had last week suspended two teachers of the school and transferred the principal over the claim of alleged sexual harassment in the school.

Sulaiman, who spoke with the PUNCH Newspaper on Friday, said he was suspended for leading some of his colleagues to a radio station where they exposed the shady dealings of some teachers of the school.

He said some of the teachers had been selling gift items donated to the school by public-spirited persons, saying the shady dealings were exposed at the radio station.

The student said the Special Adviser to Oyo State Governor on Matters Relating to Persons with Physical Challenges, Mr Ayodele Adekambi, came to the school on Thursday and claimed that he walked out on him. He said based on this, the governor’s aide instructed the school to suspend him.

Sulaiman, who is from Ibadan, said he was given the suspension letter from hostel on Friday afternoon and was ordered to leave the hostel immediately.

The suspension letter signed by the Principal of NCTB, Adedokun M.A, read, “This letter serves to inform you that you that you have been suspended indefinitely from NTCB Hostel in relation to your conduct which violates the centre’s values and moral uprightness that we strive to instill in our students.

Sulaiman, however, said he did not walk out on the special adviser to the governor.

He said he was being led by a guide to the place where Adekambi was addressing some teachers and students but he stopped to send a student to help him to look for somebody he sent on an errand.

He said the SA instructed the school to suspend him and they complied with his directive.

VIDEO: Itunu Babalola Who Died In Cote D’Ivoire After She Was Wrongly Imprisoned, Buried In Ibadan