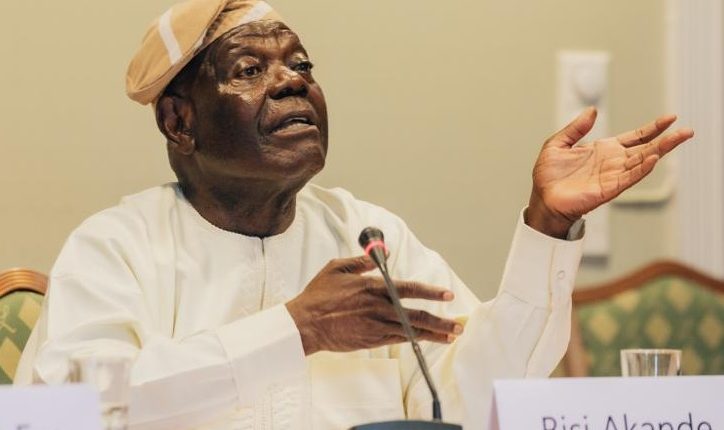 MY Participations, the autobiography of former Governor of Osun State, and Interim National Chairman of the All Progressives Congress, APC, Chief Bisi Akande, is fast panning out as a controversial book that is stirring the hornets’ nest on many fronts.

One of the controversies stirred by Akande is regarding the origins and founder of the Pan-Yoruba Socio-Economic and Political organisation, Afenifere.

Contrary to views that Afenifere was founded in 1951 by late Sage, first Premier of the Western Region and one of Nigeria’s founding fathers, Chief Obafemi Awolowo, the author said Afenifere was established in 1993 at the Bodija, Ibadan, home of late Second Republic Governor of Oyo State, Chief Bola Ige.

A host of Awoists insists that Chief Awolowo founded Afenifere in 1951, a reason they celebrated the 70th anniversary of the group, this year.

“Afenifere, as a distinct cultural organisation, just began with clear records of documentation, in Bola Ige’s Bodija home at Ibadan in 1993. I was one of the 23 foundation members. It was not as a continuation of the banned Action Group which was a political party but, this time, as a name for a new Yoruba cultural organisation. When Awolowo came back from prison, there was no mention of any cultural organization besides the Committee of Friends which metamorphosed into the Unity Party of Nigeria, UPN, also called Egbe Imole in Yoruba.

How non-differentiation of AD from Afenifere harmed Afenifere

Noting that Chief Obafemi Awolowo wanted an indelible line to be drawn between a Yoruba cultural organisation and political parties, Akande said the failure of Afenifere Leader, Chief Ayo Adebanjo to differentiate Afenifere from the Alliance for Democracy, when he became acting chairman of the party created problems for Afenifere and AD.

He said: “Shortly after the Kaduna meeting, Ambassador Tanko Yusuf resigned from the chairmanship and membership of the Alliance for Democracy. Chief Ayo Adebanjo, the erstwhile Deputy Chairman of the party, became the Acting National Chairman. Since then, it became difficult to decipher the difference between the running of Afenifere and the management of the Alliance for Democracy. Since then, the schism that dwarfed Afenifere as the organization at the apex of Yoruba organisations began. Unnecessary innuendoes were being contrived by certain Afenifere leadership to obliterate every memory that Afenifere began from Bola Ige’s home.

‘’The successful outing of the AD in the South-West during the 1999 general elections accentuated the controversy on the true history of Afenifere. Even in 2001, Afenifere was led to Owo to celebrate Founders Day anniversary. All these were being designed to undermine Bola Ige’s historical efforts in founding Afenifere as a Yoruba ethnic-cultural organisation. A serious split had therefore silently begun in Afenifere and in AD, even at the point of infancy.

‘’It is apposite to recall that Afenifere collaborated with other ethnic unions and political associations to form the All Peoples Party (APP) from which the Alliance for Democracy (AD) broke off as a distinct political party registered by General Abdulsalami’s military administration. Another growing controversy in the organisation was mainly hinged on the dissenting views on what should be the relationship between Afenifere, the Yoruba ethnic organisation and the Alliance for Democracy (AD) as a political party.

“Those who claimed that Afenifere and AD were like Siamese twins also argued that Afenifere had existed from the time of the Action Group. It is the view of those of us who assert that Afenifere’s contemporary history began in 1992 as highlighted earlier, that the Yoruba organisation should have a separate existence from the AD which was a Nigerian country-wide political party. The point must be made that the AD came into being through the collaboration of Afenifere and other organisations in different parts of Nigeria.

I believe that Afenifere should position itself as the ‘political father of the Yoruba people’ irrespective of party affiliations or ideologies. In Chapter 16 of AWO, the autobiography of Chief Obafemi Awolowo, it was clearly explained that the Action Group was formed as a distinct political party and not as a political wing of Egbe Omo Oduduwa, the then Yoruba cultural organisation. Also, at page 201 of The Voice of Reason published by Olaiya Fagbamigbe Ltd. (1981), Chief Obafemi Awolowo, in his message of good wishes, from the Prison, to the Western Regional Conference of the Action Group on 6th July 1963 stated: ‘But the line has been drawn, and must be kept indelible, between a cultural organisation like the……Egbe Omo Oduduwa, etc., on the one hand, and the political parties like the Action Group……. on the other.’

In the same message, he added, ‘Anyone who tries to limit the interests and activities of our party within the confines of Yoruba land is a traitor to the cause to which Action Group is solemnly dedicated.’

“This was the kind of schism that Afenifere was engaged in since January 1999, after the governorship elections in which the AD won in all the Yoruba states of Nigeria till 2003 when the AD was rigged out of power from all the Yoruba states, except Lagos State where Governor Bola Ahmed Tinubu became ‘The Last Man Standing.’”