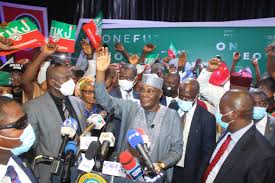 The former Vice president won with a total votes of 371 votes to defeat his closest charllenger Governor Nyesom Wike of Rivers State.

Politics took place when the Governor of Sokoto State, Governor Aminu Waziri Tambuwal withdraw is ambition and ask his supporters to vote for Alhaji Atiku Abubakar.

The Rivers State Governor Nyesom Wike has been touted to be the only one who can muscle the former vice president, wike put a good fight and gannered a total votes of 237.

Twelve aspirants contested the election where 767 out of 774 delegates voted.

Other aspirants votes are as follows…