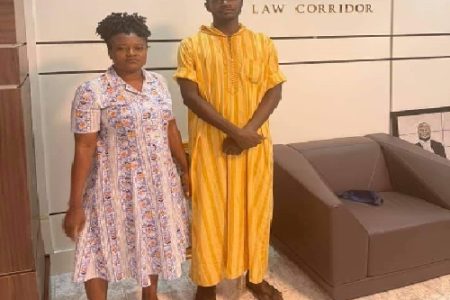 The Department of State Services (DSS) has released the remaining two aides of embattled Yoruba Nation agitator, Sunday Adeyemo, alias Sunday Igboho, who have been in custody since July 1.

The DSS had during a midnight raid of Igboho’s Soka house in Ibadan, Oyo State, arrested 12 of the activist’s allies and whisked them away to Abuja, where they were kept in detention, but 10 were released.

The secret police had held on to the remaining two aides despite an order by Justice Obiora Egwuatu of the Federal High Court, Abuja on August 4, for the release of all the 12 detained associates.

Dissatisfied with the ruling, the DSS went ahead to slam five-count terrorism charges against the two aides.

Olajengbesi, in a terse statement on Friday said: “This is to officially announce the release of Amudat Babatunde Abibat AKA Lady-K and Jamiu Noah Oyetunji, the remaining two Sunday Igboho’s aides, from the State Security Service Custody today – 22nd October, 2021.

“While the matter is still a subject of litigation, we shall have no comment further on this for now.”