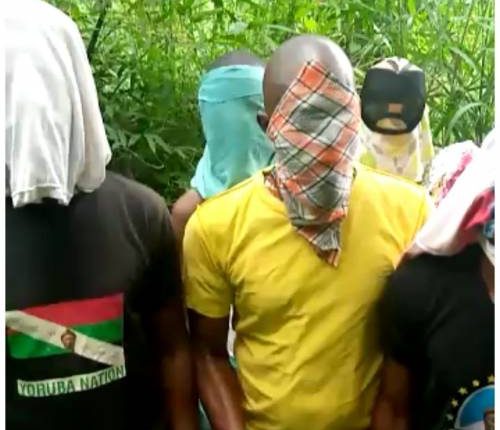 Some masked men from Oyo State have issued a 30-day ultimatum to Fulani and Hausa people to leave all parts of Yorubaland.

They also said the herders among them should leave along with their cattle.

This was contained in a video obtained by SaharaReporters on Saturday. Some of the men were clad in Yoruba Nation vests.

Their leader, who identified himself as Sunday Oyo, urged President Muhammadu Buhari to advise “his people” to leave Yorubaland within a month or face the consequences of disobedience, which they said might be gruesome.

The young man noted that though the Nigerian government was able to ensure the arrest of Yoruba Nation agitator, Sunday Adeyemo, aka Sunday Igboho, he, Sunday Oyo is different.

Igboho was arrested in Benin Republic in July while he and his wife were trying to travel to Germany. He has since been detained in the country.

However, Oyo said: “We are using this opportunity to warn President Muhammadu Buhari that he should immediately evacuate all Fulanis and Hausas from Yorubaland.

“We don’t want to have a relationship with you, let everyone go their separate ways. The torture is too much, let’s have our nation, and you have your nation, and be careful or else…

“We give you 30 days to leave Yorubaland generally. You have arrested Sunday Igboho, I am Sunday Oyo, we will deal with you. After 30 days, whatever your experience is, you should accept it as your fate.”

JUST IN: Fire Outbreak At Filling Station, Extending Towards…

SaharaReporters had reported a similar threat made by Igboho in the past.

He accused the Fulani community in the area of masterminding abductions, killings, and other criminal activities in the area.

“Fulani cannot take over our land from us. We own our land and we won’t allow anybody to take it from us. Some people are intimidating us but we won’t succumb to their threat. For the Fulani living here, we are not fighting them, if they can live with us peacefully. Our fear is about Fulani taking over our land, kidnapping, and killing our people.

“We will evict them from our land if they insist on kidnapping our people. I am assuring Yoruba people, especially the residents of Oyo State that there is no cause for alarm. What we started today does not only have to do with Oyo State; we are going to evict Fulani people in the entire Yoruba land,” he had said.

Since his emergence as one of the masterminds of self-determination for the Oodua/Yoruba Nation, Igboho had faced several travails.

For instance, on July 1, 2021, his Soka residence in Ibadan was invaded by operatives of the Department of State Services (DSS), also known as the State Security Service (SSS) or secret police.

He was on July 20 arrested in Cotonou while trying to travel to Germany.

The Yoruba Nation agitator fled Nigeria after he was declared wanted by the DSS following the alleged discovery of weapons in his Ibadan residence.

He, however, denied owning the weapons found in his house, stressing that they were planted there by the security agency.

JUST IN: Fire Outbreak At Filling Station, Extending Towards Bashorun Market In…