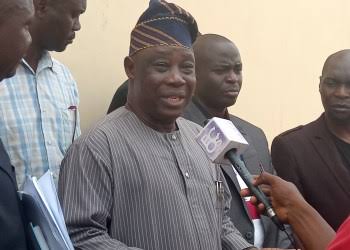 The Oyo state house of Assembly has received the nomination of Barr. Bayo Lawal as the new deputy governor of Oyo state, Akéde Ọ̀yọ́ reports.

The house which pronounced the impeachment of Rauf Olaniyan, earlier on Monday have thereon Confirm Bayo Lawal Nomination as replacement for the impeached former Deputy Governor

The embattled former Deputy governor was impeached on five count charge for which he was unable to defend himself, he was later pronounced guilty and impeached by majority of the House of Assembly.

Barr. Bayo Lawal until his nomination was the chairman Oyo State Housing Corporation and the running mate to the governor in the forthcoming election.

Bayo Lawal is a 76 years-old lawyer by practice and a former Commissioner for justice of Oyo State.

He hails from Kishi, Irepo local government of Oyo state.