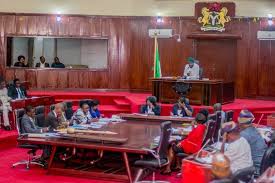 The Oyo State House of Assembly has granted the request of Governor Seyi Makinde on his plan to obtain N100 billion private bond tagged “Oyo Prosperity Bond” in order to facilitate the execution of ongoing projects that will further boost economic of the State.

The sanction came during its plenary on Thursday, in Ibadan, considered the report by the Committee on Public Account, Finance and Appropriation to approve the request.

Akedeoyo.com recalls that the Commissioner for Information, Hon Wasiu Olatubosun had hinted that the fund would be raised in two tranches of N50 billion each for the construction of the 50 kilometre Iseyin-Ogbomoso road, the Ibadan Circular Ring-Road and Ibadan Airport upgrade.

The Commissioner stated further that the State would construct and upgrade, with modern equipment, one Government hospital in each of the three senatorial districts of the State.

The Commissioner further stated that the 21 kilometre Airport – Ajia – New Ife Express Road with a spur to Amuloko in Ibadan would also benefit from the alternative project funding approach of the State Government.

According to the Dr Olatubosun, “considering the infrastructural needs of Oyo State to enhance its economic potentials, the State Government has approved the issuance of private bond tagged “Oyo Prosperity Bond” to facilitate the execution of priority projects with a view to raising one hundred billion Naira (N100bn), which is to be raised in two tranches of fifty Billion Naira (N50bn) each.”

“The State Government has approved Oyo State Prosperity Bond to allow for quick completion of these iconic priority projects. The construction of Iseyin – Ogbomoso Road is very important because when completed, it will serve as a link road and help to save many hours spent on traveling and the lives of commuters, who daily experience vehicular accidents on various roads that link the already dilapidated Ogbomoso Road.”

“With this approach in place, there will be transfer of projects’ risk to private entity while the hassle of debt management office (DMO) approval would be avoided and the quality delivery as well as quick completion of project would be ascertained,” Olatubosun said.