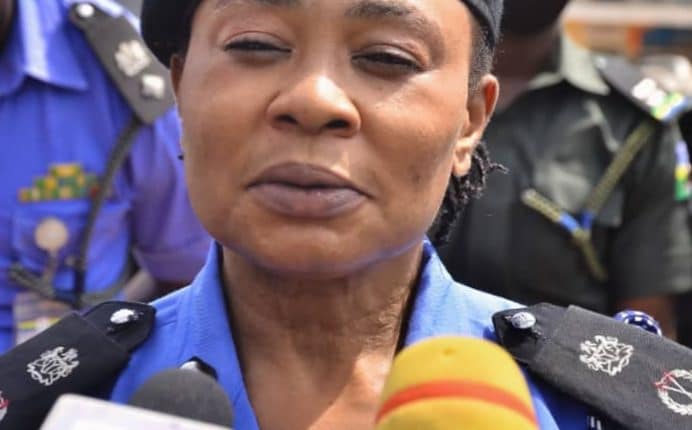 BREAKING: Rogue Police Not From Our State Command – Oyo Police Denied Officers Who Collected 150,000 From Artist

Following an allegation by a young man named Jesugbemi who alleged that Police officers suspected to be from Oyo State command on Thursday snatched a sum of money in the sum of N150,000 (one hundred and fifty thousand naira) meant for payment of house rent from him, Oyo State Police Command has reacted by stating clearly that the said rogue Policemen are not from Oyo State Command.

In a statement by the Oyo State Police Public Relation Officer (PPRO) DSP Adewale Osifeso on behalf of the state Commissioner of Police, CP Ngozi Onadeko on evening of Friday October 8 and made available to Akéde Ọ̀yọ́, the state police command said the operational jurisdiction of the said rogue officers are yet to be known.

Recall that a woman, Taiwo Ogunade, lamented on Thursday how some men suspected to be policemen attached to the Oyo State Police Command snatched money and phone from her grandson.

Ogunade, who spoke to our Journalists amid tears on Thursday, said that the N150,000 she gave her grandson, Emmanuel Jesugbemi, to pay for her rent was taken by the officers.

She said, “I don’t like something that will make my blood pressure rise. I am fed up and I know that God will punish them.”

Her voice was drowned in a flood of tears, as she could not continue the conversation.

Her grandson, Jesugbemi, said that the incident happened in the Apata area while he was going to deposit the money in the bank.

The 20-year-old claimed that the policemen, led by one Badru Samson, waylaid the motorcyclist conveying him to the bank and ordered him to get down.

However, the Oyo Police Command did not deny the weather the police officers were real officers or armed robbers disguised in police uniform to perpetrate crime but maintained that the identity of the officers are yet to be known.

“The attention of the Oyo State Police Command was on Thursday 07/10/2021 drawn to a 1minute 50 seconds video made by one Emmanuel Jesugbemi, ‘m’, alleging that he was at gunpoint, robbed off his handset and cash to the tune of #150,000 (One hundred and fifty thousand naira) by rogue Police Operatives, purportedly attached to the Command around Apata area, under Ido LGA in Ibadan.

“It is worthy to note that the Command frowns at this serious misconduct and wishes to intimate members of public that the matter was immediately escalated through an investigative inquiry setup by the Commissioner of Police, Oyo State Police Command, CP Ngozi Onadeko fdc upon its receipt.

“Preliminary investigations have revealed the alleged Culprit identified by the Victim does not serve under Oyo State Command but was rather in the jurisdiction on other yet to be specified duties.

“Furthermore, Investigations are in top gear to apprehend all the officers involved in the unpleasant actions of Thursday 07/10/2021 for their various involvements with the assurances of adequate sanctions meted out on all guilty parties upon recommendations from the Investigation panel.

“Lastly, the Command sues for calm while appealing to members of the public that no offender(s) would on any account be indulged to evade deserved Justice regardless of status or affiliations.” The statement concludes.