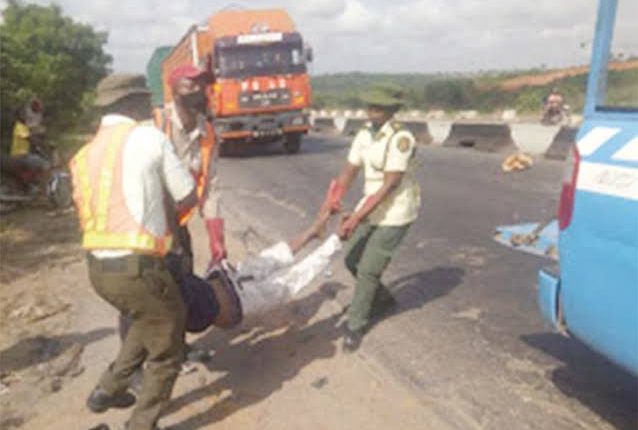 A bus driver has been confirmed dead while 21 people sustained injury in an accident that occurred on Lagos-Ibadan expressway.

The accident which occurred in the early hours of Monday, involved a luxury bus and a truck with no registration number on both vehicles.

She explained that the truck driver rammed into the stationed bus and killed the driver of the bus who was under the bus trying to rectify some issues discovered from the vehicle.

Mrs Okpe said the injured victims had been taken to a private hospital in Mowe for medical attention while the corpse was also deposited at the same hospital.

In a similar development, three members of the Redeemed Christian Church of God (RCCG), have met their untimely death as they returned home from the just-concluded 70th convention of the ministry, on the Lagos-Abeokuta express way.

On Sunday, August 14, 2022, as the RCCG members were heading home, the bus they boarded somersaulted at the Abeokuta-Siun-Sagamu interchange around Kobape in the Obafemi-Owode Local Government Area of Ogun State.

The accident which involved a Mazda bus with registration number APP 297 YC, happened after the vehicle had a burst tyre.

Confirming the accident, Spokesman for the Traffic Compliance and Enforcement Corps (TRACE) in Ogun State, Babatunde Akinbiyi said 16 passengers were on board the vehicle, adding that they include five male adults and 11 female adults.

“Further investigation confirmed that the bus was coming from Redeem Camp and passengers were among the congregation who partook in the just concluded 70th Convention tagged Perfect Jubilee.

“Three passengers, made up of two males and one female died in the unfortunate crash while 13 others made up of five male adults and 10 female adults were injured including the driver”, he added.