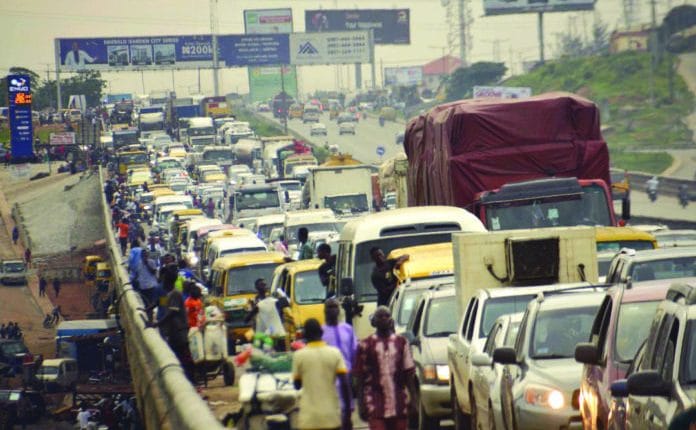 In the last three weeks, passing through the Lagos–Ibadan Expressway outbound Lagos has been a hell of an experience for commuters and residents of the area. Life has taken a turn for the worse for all on this busy route, especially for students using the road from Ogun State to Lagos State. OLALEKAN OKUSAN felt the pulse of the commuters who tell their harrowing tales arising from using the federal highway.

Yemi Adegbemiro, an engineer, was rushed to the hospital over the weekend following an exacerbating back pain he had experienced in the last week. After an x-ray, it was discovered that sitting for a long time in traffic on the outbound Lagos-Ibadan Expressway was a major cause of his back pain.

Like Adegbemiro, Uche Eke lives in Magboro, Ogun State but works on the Lagos Island. However, in the last two weeks, he has been spending more than four hours on the stretch of road spanning OPIC and Arepo daily. It got to a head last week and Eke could not take it anymore, Consequently, he has decided to relocate to the Mainland area of Lagos State.

“I cannot continue to stay in traffic for hours. In the last two weeks, I spent no fewer than four hours whenever I am returning from work by 5 pm. This is killing and I told myself that if I continue this way, I might die before my time. There is no doubt that the road construction will help the residents along the road but the way and manner the contractors are handling the job show that they don’t care about the health of the people. When the road was demarcated early this year, we had thought that it would take six months at most for it to be completed but we are approaching the end of the year and the road remains uncompleted. I am particularly concerned about the outbound journey because most of the time the traffic snarl stretches to Alausa Secretariat. This is indeed killing,” Eke lamented.

Benson Adejoh, a businessman who commutes between his home in Ibafo, Ogun State, and Ikorodu Road in Lagos State, makes a passionate appeal to the government to prevail on the contractors to consider the health of commuters using the road. “The Ibadan leg of the project is near completion but the stretch of Sagamu Interchange to Lagos has been a horrible experience for most of us living in that axis. I spent three hours going to Lagos in the morning and I spend the same hours returning home in the evening. My concern is why they are spending eight years to construct a road that is less than 60km. The contractors have made life unbearable for residents in the area. If not for the intervention of the Nigeria Police on the Long Bridge, it would have been another story entirely because of the traffic robbery that used to take place on the bridge daily. But the presence of policemen on the bridge has drastically reduced the incessant attacks. We cannot continue to live as if we are in a jungle. I think there should be a lasting solution to this daily horrible experience on the Lagos-Ibadan Expressway,” Adejoh said.

Following an overflow of water on the untarred road adjourning the Long Bridge, some impatient and unruly drivers often decide to break the law by facing the traffic heading to Lagos. Most times, this illegality causes a standstill on the expressway.

A commercial driver, Musiliu Ali, said he had decided not to ply the road again as he cannot meet up with his daily returns. “I don’t think I will be plying that road until things improve because I cannot meet up with my daily returns due to traffic. Before the road was demarcated at the Long Bridge end heading out of Lagos, I used to ply the road eight times a day, but now I hardly manage two trips because I spend most of my time in traffic. This is not good for business. So I have decided to change routes so that I can meet up with my daily returns. But my appeal to those handling the project is to consider people plying the road as the traffic is not friendly at all in the last two weeks,” Ali said.

Benson Adegoke, a student of Omole Grammar School in Lagos cannot forget the experience of the last two weeks in a hurry as he most times trek from Ojodu Berger to Magboro before getting a bus heading to Mowe.

“I trekked throughout last week from Berger to Magboro before getting a bus going to Mowe. It has not been a good experience for me that most times I am always afraid of going back home because of the harrowing experience of the traffic on the Long Bridge due to the demarcation toward the end of the bridge. Though coming in the morning is not always that bad but coming back home has not been encouraging because I get home late and I had to wake early to get to school before 8 am. For us that are students, we have gone through the worst of the road but this latest experience has not been good at all especially when we had thought we will soon heave a sigh of relief. I am just appealing to the government to urge the contractor to conclude the project on time,” the senior class three student said.

Mrs. Chinwe Okoro, who resides in Ibafo said the high fare has adversely affected her pricing. “I used to go to Mile 12 thrice a week but now I go once and whenever I go the fare has been doubled so I had to add this to my cost price and this has affected the price of my pepper. “Why can this project be concluded and how many years are they going to use to construct a road that is not up to 50km. I am still wondering when we are going to come out of this ugly experience. We are afraid to go to Lagos because of this unpalatable experience and it is high time that the government called the contractor to order and expedite action on completion of the work,” she said.

For the Federal Controller Works, Ogun State, Olukayode Popoola, the pace of work on the demarcated area in Arepo would be increased while assuring that in two weeks, the contractor would finish the work.

“We want to appeal to the public to please bear with us because in the last few weeks, the pace of work on the Arepo axis of the road has been increased and we are hopeful that in the next two weeks, the contractor should be out of the site and things would get back to normal on the road. We should also look at the rain, which has slowed down the work and we believe that the effort is for development purposes,” Popoola said.