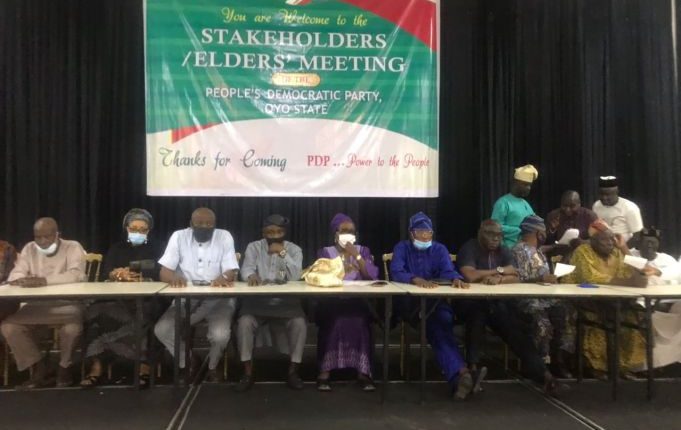 ANAYO EZUGWU reports that the crisis rocking the Peoples Democratic Party (PDP) in Oyo State has continued to deepen, with some aggrieved members calling on Governor Seyi Makinde to resign from the party

Despite efforts of the national leadership of the Peoples Democratic Party (PDP) to restore in Oyo State chapter of the party, the party seems more divided ahead of the state congress on Saturday (tomorrow) as some aggrieved members have commenced mobilisation against Governor Seyi Makinde.

The aggrieved party members from the 33 local government area at a meeting on Monday, September 20, passed a no confidence vote on the governor and urged him to resign from the party. Among party chieftains, who attended the meeting include Mulikat Akande-Adeola, Mogaji Nureni Akanbi, Alhaji Adebisi Olopoeyan, Gbolarumi Hazeem and Femi Babalola. Akande-Adeola, a former Majority Leader of the House of Representatives, who spoke after the meeting, said: “Against the governor’s promise before and during the election, we have been neglected. Those who were not around during the election are the ones benefiting from the government.

“Go to your wards, mobilise your people. Don’t fight anybody. Record whatever happens and leaves us to do the remaining in Abuja,” they charged. Also, the PDP chieftain said never again would they entrust their destiny in the hands of someone like the incumbent governor, while vowing to do everything to prevent Governor Makinde from picking the party’s ticket for a second term. But Akeem Olatunji, the state PDP spokesman, said that those calling for Governor Makinde’s resignation from the PDP are the enemies of the party.

He alleged that the aggrieved PDP members were working for the opposition. “No real member of the PDP in the state will ask the governor to resign because he is the heart and soul of PDP in Oyo State. Ninety-five per cent of our members are with Makinde. If those aggrieved are popular, let them prepare for the congress, which is coming up on Saturday,” he said.

Governor Makinde and the aggrieved members have been at loggerheads since the inception of his administration over allegations of neglect. The crisis rocking the party started shortly after the 2019 governorship election, when some leaders of the party accused the governor of abandoning those who worked for his victory and pandering more towards non-PDP members and groups in appointment and patronages. Akande-Adeola, who explained the situation then, said: “I feel used, l feel dumped.

I think this was the situation from day one but l didn’t see it, l was just like PDP must win, PDP must win. That was what l was saying. I stepped on toes and a lot of people were not happy with me because l supported Governor Seyi Makinde. I was blinded by the success l wanted for PDP and nothing more. It was nothing personal.” The crisis later assumed another dimension when the faction of the party opposed to Governor Makinde opened its own state party secretariat office in Ibadan, the Oyo State capital. But few days after the secretariat was opened, the crisis deepened as hoodlums suspected to be sponsored by members of the same party attacked and vandalised the building.

The governor, who acknowledged the crisis in the party, set up the Dr. Saka Balogun-led Elders Steering Committee. While inaugurating the committee on June 15, 2020, Makinde said: “The task before this committee is to assist us to get to the roots of all the challenges with our party, the PDP in Oyo state. A failure is hard to take, but success is harder to manage because expectations were quite high.

Similarly, the national leadership of the party also sent the Senator Bukola Saraki-led Reconciliation Committee to the state to resolve the intractable crisis. When the committee visited the state, it assured the aggrieved stakeholders that their labour towards the emergence of Governor Makinde-led administration would not be in vain. “We are here as part of the National Reconciliation Strategy Committee assignment and we are very happy with what has transpired this afternoon here with the PDP family. All the parties have resolved to work very closely together under the leadership of our performing governor, Seyi Makinde.

“We have all decided to put all the areas of differences aside and work towards ensuring that PDP is victorious not only in the state but at the national level. I want to commend all our stakeholders who have come and have agreed that today is the beginning of a new chapter in Oyo State. “We want to thank our governor for his commitment as he said ‘I am a beneficiary of what the party is doing and I hope that when I finish my own term too, people in PDP will continue to benefit from that. So, everyone is committed to ensuring that PDP continues to work and strive very strongly here in Oyo State.

“I think it is the beginning, but we have started the process. The commitments have been made by the governor and the stakeholders. That has started and some steps have already been taken today. We are very confident that for coming out of it, definitely there is new dawn ahead of us here in Oyo State.

“The first thing everybody says is that we know that our governor is performing; in the area of governance, we are doing very well. They are all proud to be associated with the governor; they believe that there should be a need for more recognition to some of the people that worked hard in the election. “And the governor has said ‘I am doing my best; those who have not been fully recognised will be fully recognized. And they have all said once that is done by the governor, they are good to go and they are ready to work with him. So, it is just to start implementing those and rolling that down the line.

“The PDP is already a formidable party in Oyo State and in the South-West. What we are trying to do here today is to consolidate on that and from there we also want to move into the South-West to ensure the PDP gets stronger. I am confident that with the calibre of people that have attended and the issues expressed are not issues that are insurmountable,” Saraki said. Despite the peace parley, the aggrieved members are still accusing Governor Makinde of not fulfilling the agreement reached with the stakeholders. A stalwart of the party, Alhaji Bisi Olopoeyan, alleged that the governor is not interested in any genuine reconciliation with aggrieved members of the party. He premised his position on the exclusion of some members from attending the party’s caucus meeting held at the Government House recently, where some other leaders of the party were present.

He said: “The governor said he met with the leaders of the party; are we not leaders of the party as well? We heard the party chairman said he reached out to us for the meeting. You need to re-interview him to tell you who and who he sent the meeting invitation to. “Even then, as the state party chairman, who knows there is a crisis in the party, ask him about the personal efforts he made to reconcile the aggrieved side; he only acts as directed. Some people said I did not attend Saraki’s reconciliation meeting held in August at the Government House.

Yes, I didn’t attend the meeting because the aggrieved leaders of the party had earlier met with the reconciliation committee in the morning at a hotel in Ibadan. “So some of us decided not to meet again with Governor Makinde for the afternoon’s meeting because it was not necessary. We met the committee and made our stand known, that’s all. What the governor is doing will have great negative impact on the chances of the party securing the state in 2023. Our resolve is that they should take the party structure back from him and hand it over to leaders of the party.”

Despite all the allegations against the governor over his style of governance and treatment of party stakeholders, some members loyal to the governor and his appointees continue to maintain that all is well in the party even though there is evidence of a crack in Oyo PDP. However, ahead of tomorrow’s congress in the state, it is yet to be seen how the party would address the grievances of some of its members even after the exercise.