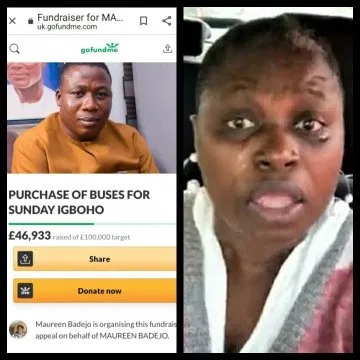 Controversy trails the GofundMe fundraiser raised by supporters of popular Yoruba freedom campaigner; Sunday Adeyemo commonly popularly called Sunday Igboho as a viral video showed the convener, Maureen Badejo alleging that N2.5 million was given to Igboho but he did not acknowledge receipt.

Recall that a Gofundme to raise £100,000 (N51.8m) account was opened by a blogger: Maureen Badejo, a few weeks back to buy buses in support of Sunday Igboho’s campaign of ridding the South-West of killer herdsmen.

Igboho, during a virtual town hall meeting, had hinted that he needs buses to “transport people” for his south-west tour.

“I need buses to transport people. The three vans we use were bought by me. We lost three buses that were hired on our way to Oyo,” he said.

In a now widely circulated video posted by one political critic on Twitter, Kayode Ogundamisi showed there was a money argument between a lady and Yomi Koiki, Sunday Igboho’s spokesman.

The lady alleged N2.5 million was given to Igboho but he did not acknowledge receipt even after he admitted collecting another N6.5 million from a Yoruba group in the US.

‘’Yoruba liberation should not be a money-making venture,’’ Badejo said in the video.

She alleged Koiki failed to acknowledge N2.5m donated for “feeding” for over 2 weeks after he allegedly described the funds as “no big deal.”

“It is an insult to say N2.5 million feeding money is not a big deal,” Badejo said.

This accusation has led to the labelling of Badejo, who raised the fund as a ‘fraudster’ which informed her petition to the fundraising platform.

Badejo is reportedly to refund the £46,933 raised for Igboho to donors if the accusations are true.

Meanwhile, Sunday Igboho’s spokesman, Koiki, could not be immediately reached for comments.