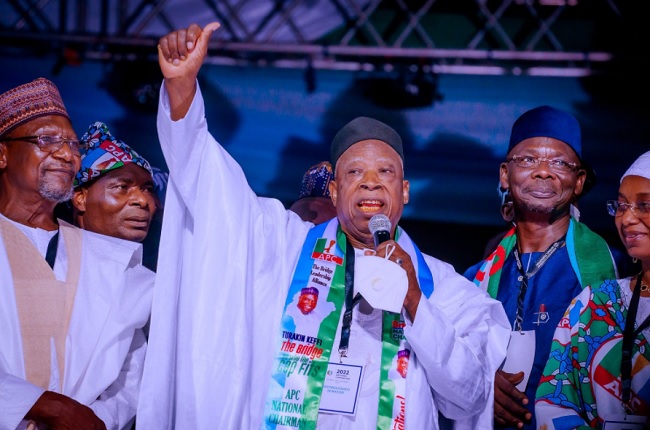 SATURDAY’S national convention of the governing All Progressives Congress (APC) provided a stunning twist to the various dramas acted by its top political actors in the build-up to the event.

Visible divisions had crept into the party even among its 22 governors over the process leading to the convention with the Niger State governor, Abubakar Sani Bello, temporarily replacing the immediate past chairman of the party and Yobe State governor, Mai Malla Buni.

It took a London meeting between President Muhammadu Buhari and Buni for the latter to regain his position.

Sunday Tribune gathered that last-minute horse-trading and intrigues which saw leaders of the various blocs in the party meeting from Friday till about noon on Saturday paid off, as other leaders agreed with President Buhari on the choice of a former governor of Nasarawa State, Alhaji Abdulahi Adamu, as the party’s national chairman.

But the only name missing on the Unity List hitherto touted before the convention was that of a former Senate President, Ken Nnamani, who was consumed in the power play in the South-East zone.

Nnamani, originally slated to fill the slot of the Deputy National Chairman (South), lost out to Emma Eneukwu from Enugu State.

Eneukwu, who is of the defunct All Nigeria People’s Party (ANPP), one of the legacy parties that birthed APC in 2013, was a member of the party’s National Working Committee (NWC) under the chairmanship of Chief John Odigie-Oyegun.

A former deputy governor of Osun State, Senator Iyiola Omisore, emerged the National Secretary of the party, having been unanimously endorsed by the South-West caucus of the party where the position was zoned.

FN Nwosu from Abia State was endorsed as the National Welfare Secretary and Tolu Bankole (Ogun) as Special Person With Disability Leader.

The emergence of the new NWC members of the party puts the governors of the party in the driver’s seat as far as the control of APC’s soul is concerned.

Sunday Tribune gathered that the idea of Adamu’s candidacy was first sold to Buhari through his close aides by a former governor in the South-South zone.

The governors of the party were said to have later taken over the Adamu project in what a party source said was “a successful beginning of the self-preservation project of the APC governors.”

The convention, which started well behind schedule, held in a carnival-like atmosphere as various music acts entertained party faithful who waited for the arrival of the leader of the party, Buhari, for hours.

Vice-president, Professor Yemi Osinbajo, arrived at about 6.58 pm, almost an hour after Tinubu came into the flood-lit venue.

A large number of praise singers, drummers and supporters of the latter massed around him as he moved to join other APC leaders at the VIP stand reserved for them.

At 8.21pm, the advance security team of the president zoomed into the venue, heralding the arrival of Buhari.

Before news filtered to the convention ground at all the NWC positions had been filled through a consensus arrangement, there was palpable anxiety as rumours swelled among delegates that some governors may try to upturn the consensus agreement reached on the national chairman position.

Speculations were rife that the long delay in the take-off of the event was due to the threat by some governors to ditch the agreement reached on Adamu.

There was also the rumour that some were toying with the idea of staging a walkout in a mimic of the 2014 experience of the Peoples Democratic Party (PDP).

As of 6.50pm, Governor Badaru Abubakar of Jigawa State announced to the delegates that the party was still working to reach consensus on all positions so that there would be no need for election. The governor affirmed that it was the desire of President Buhari.

Also speaking, the Minister of Aviation, Hadi Sirika, appealed to the delegates to exercise patience.

The delegates, who insisted that they must leave accused, them of anti-party activities in the last governorship election won by the candidate of the Peoples Democratic Party (PDP), Godwin Obaseki. The APC candidate, Pastor Ize Iyamu came second in the election.