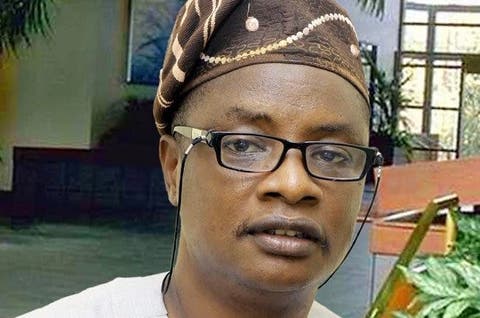 An Ibadan-based Broadcaster, Olayinka Agboola has urged the US President, Donald Trump not to play Politics with his COVID-19 status. He added that he ‘died’ thrice from the virus when it was confirmed that he had the pandemic.

In an open letter issued on Tuesday, Mr. Agboola said that when he learnt about his COVID-19 status in late September, his life became worthless.

The statement titled: “Open Letter to President Donald Trump: Please Stop Dancing on the Graves of Great Americans, Other Citizens of the World Who Died of COVID-19” reads: “My name is OLAYINKA AGBOOLA, a journalist, publisher and broadcaster from Nigeria, Africa. I am at present being treated as a REAL victim of the novel coronavirus (COVID-19) at one of Africa’s best tertiary health care institutions, the University College Hospital, here in Ibadan, the capital city of Oyo State (of Nigeria).

“I really got compelled to send you, Mr POTUS, this message because of the current discussions concerning your supposed COVID-19 status.

“As far as I am concerned, you really do not know what the dreaded disease is all about. If you did, you would not be using it (directly or indirectly) as some kind of tool in your political manoeuvrings. I am definitely not interested in how you go about your re-election campaign, but I do solemnly plead that you keep away from alluding to, or imagining you have some kind of relationship with COVID-19 thereby making insinuations that the disease is nothing to be afraid of. I hereby submit that this virus is not a child’s play; it is in fact so deadly that everyone must regard it with every sense of responsibility and utmost caution. I so declare because I have been through the crucible and I would have joined the demography of fatalities occasioned by the virus but for an act of divine providence. Permit me to briefly tell my COVID-19 story if it will help sir.

“My Abridged Story: I am one of those who never believed in the genuineness or reality of the existence of the pandemic especially in Africa. This manner of torpor may have been a direct consequence of acute lack of faith in the leadership of Africa as is the case with most of us in this part of the world. Suffice this to say that I ensconced myself in my belief that the campaign about COVID-19 was nothing short of a money-making venture for those on the corridors of power. I wore this conviction like an epaulet as I went about my daily but heavy assignments. I am proud to say here that in our little outfit here in Nigeria, we publish Parrot Xtra Glossy Magazine and the online version, PMParrot.com. In addition to these, we also run a popular Radio Magazine Programme called Parrot Xtra Hour on Radio live on Space 90.1FM.

“September 15, 2020 was another day for our radio show and our guest was Abass Akande Obesere, one of Africa’s best who sings a heavily percussive brand of Fuji music. I had earlier sensed a tiny bit of fever which I readily put down to my rather stressful schedule. I should have promptly attended to my health but I decided to go ahead with the radio show in order not to disappoint the artiste and the teeming audience which had been primed to look forward to the edition. Off I went to the studio to host him, live.

“After the show, I drove to the private hospital of a friend, Dr Abiodun Are in the same city for medical care. When he insisted I must wait to be comprehensively treated, I threw him a look that could fell an elephant- ‘Couldn’t he give me a prescription note to a Pharmacy Store for some quick-fix drugs?’ I demanded. He obliged most grudgingly. I took the prescribed drugs and in spite of the fact that my body gave signs that the drugs didn’t give the needed respite, I chose to keep pushing myself hard till the weekend when it became crystal clear that the wheels of the cart had stuck in quicksand and I could push no further.

“I returned to Dr Are who, there and then insisted on me being clinically tested. A blood culture showed that my frail body had succumbed to three Malaria ‘pluses’. I was aghast. I allowed him to administer some injections but by Monday, 21st of September, I stopped all medications again. Why? It was time for another edition of our radio show during which I was meant to interview Mr. Adebayo Shittu, a lawyer and former Nigerian Minister of Communication. I barely cruised through the show before collapsing on Tuesday, September 22. I was rushed to Teju Specialist Hospital owned by a popular and veteran medical practitioner, Dr Yinka Griffin.

“Upon arrival at the hospital, the experienced medical practitioner knew what the problem was as the symptoms were clearly written all over me. He promptly isolated me in a room where he personally came to attend to me urging me to allow myself to be subjected to COVID-19 test. Like a possessed man, I blew my top telling him that COVID-19 was not in my own dictionary. He silently walked away and kept me in his hospital doing his best and allowing me to still be on riot with my self-delusion about the non-existence of COVID-19. I had by then started experiencing fitful coughing which seemed to be graduating in intensity by the second.

“On Thursday, September 24, Dr Griffin tactically discharged me, urging my darling wife, Oluwatoyin, to take me to the University College Hospital (UCH), where I am still on isolation even as I write this account. The rest, as they say, is story for another day. I was placed on oxygen and taken through the best possible treatment regime for my condition.

“From that Thursday till my results came on Saturday, I was managed and eventually taken to the Centre for Infectious Diseases for further virus-specific, comprehensive care.

“For four straight nights, I remained in serious crisis. I ‘died’ thrice. I saw God. COVID-19 showed itself to me in its most virulent form. I met and battled COVID-19 in its naked form. It attacked the entire faculties in my physiology to the extent that I would have gladly chosen death if I was asked to choose. I turned miserable, dejected and utterly despondent. At a stage, I lapsed into amnesia as everything began to appear to me like a vast, undecipherable pool of mirage. I coughed on permanent basis. I later felt as if one of my lungs was going to jump out of the hollow crevices of my belly. COVID-19 ravaged me. I met GOD. And He showed HIMSELF to me.

“In those four turbulent nights, my doctors and nurses would carry out the protocols of recommended drugs and watch me from across a glass partition as I battled with my life and GOD. Even in my misery, I had no way of missing the transparent anxieties on their faces. My wife, of course, would stand petrified with unmistakable fear on her pretty face. Each of them wished to help me beyond protocols but they just had nothing more to offer!. It was COVID-19, and nobody knew anything about what next line of medical action to take or what would happen if any attempt was made to ‘improvise’ outside stipulated protocols.

“Though series of tests have indicated that I am still positive till date, I stand to testify that GOD has carried me through the valley of the shadow of death and has delivered me safely on the other side of life and light. He has inspired me on several other issues that will unfold presently. He allowed the virus to swirl me around but disallowed me from succumbing to its crushing grips despite my stance as a doubting Thomas. I hereby confess that my avowed disbelief was a dastardly combo of crass ignorance and irresponsibility!

“God, however, made me to understand that COVID-19 will never leave mankind alone. It is HIS own way of telling us that HE IS GOD. It is a way of keeping governments (especially African) on their toes to always carry out their duties especially in terms of provision of primary health care to their helpless citizenry. The World Health Organisation and others should take note of this. Efforts should be geared towards how to build citizens’ immunity levels.

“Now, Mr POTUS, I believe you will trust in my judgement. I am a lucky living victim of acute COVID-19. I know COVID-19. It knows me. May you not experience 10 per cent of what I went through. Using this pandemic as pawn on your political chessboard is therefore most unfair especially given your status as the most powerful living being whose utterances carry weight in the estimation of your hapless followers in America and the rest parts of the vast globe. Several citizens of the world lost their lives to COVID-19. You, POTUS, should be at the forefront leading other leaders across the world to lend their voices to the campaign for all peoples of the world to observe all protocols in the bid to stem the ugly tide of this killer virus.

“Sir, please stay on your lane as we would say in the street lingo of the world’s most populous black nation!. Concentrate on your re-election campaign. Leave COVID-19 out of your political grandstanding. God alone will decide your fate. Bow to GOD. It shall be well with you.”