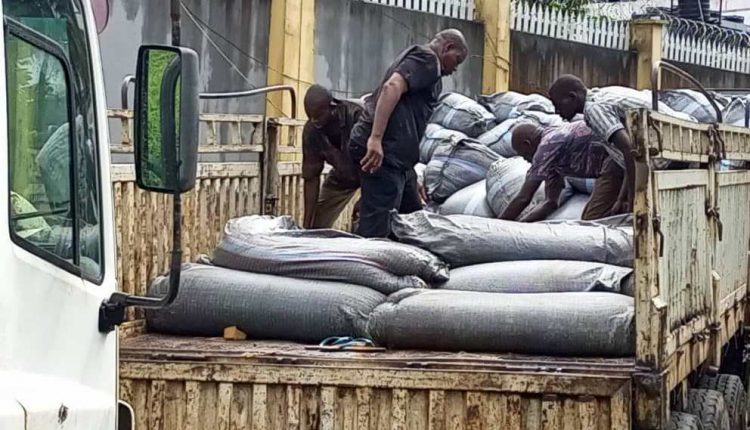 Officers of the Oyo and Osun Command of the Nigeria Customs Service have intercepted a truck with Premium Motor Spirit stocked inside polythene bags.

The Area Comptroller, Oyo and Osun Command, NCS, Adamu Abdulkadir while displaying the seizures before journalists attributed the feat to the vigilance of his men, nothing that the command under him would make the area inconducive for economic saboteurs

He described the action of the suspected smugglers as purely economic saboteurs stressing that their actions is against the economic recovery plans of the present administration.

Abdulkadir promised that the command would shore up its intelligent gathering in a bid to rid the state of smugglers, bunkers among others.

He explained that around 07:30 hours his officers who were on operational patrol along Alomaja of Lagos Ibadan Expressway stumbled on set of bunkers who were operating with generating sets, pipes, were met working with the pipes siphoning PMS into nylon sacks while some have already been loaded inside a waiting truck.

He added that their mode of operations was to move away from the scene of the operation with the carefully loaded PMS and offload it into another tanker that was parked somewhere with the aim of diverting the content to their desired destinations.

He said “My officers swung into operation and get those economic saboteurs arrested and proceeded straight to the Command Headquarters to report the case.

“Nobody can do this country better for us, it is we that can rewrite the history of this country, Oyo/Osun Customs officers are here to make the management and my Comptroller General of Customs (CGC) proud, we are showing the CGC that we are on top of the situation, that he can go home and sleep with his two eyes closed, I give kudos to these hard working officers and I am ready to back them to any level as far as they are here to work and continue making my CGC and the entire management proud.”

Comptroller Abdukadir Ramat however revealed that the officers of the Command were able to arrest the suspected bunkers and recovered the truck containing 100 bags of PMS worth 10,000 liters.

Save Us From Illegal Charges From Lecturers, Administrators — LAUTECH Nursing Students Cry Out