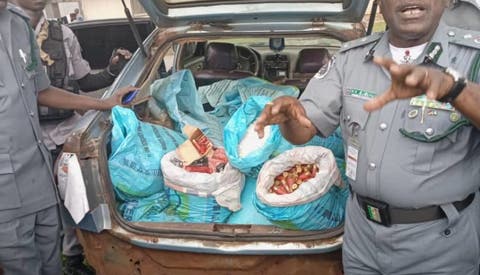 This is even as the unit revealed that other contrabands ranging from 229 wraps of Indian hemp, 856 jerrycans of petrol at 25 litres each, 21 cartons of cutlasses at 60 pieces each, among others, were also seized in the last three weeks in both Oyo and Ogun states.

Addressing a news conference in Lagos on Friday, acting Customs Area Controller of the FOU, Zone A, Hussein Ejibunu, revealed that the massive use of motorcycles to smuggle parboiled rice at 50kg each using bush paths not accessible to vehicles is a disturbing trend being deployed by smugglers in recent days.

According to him: “Hereunder is the list of 28 seizures for the last three weeks:

“The aforementioned seizures were effected at different flash points in the zone prominent among them being Ado-Odo, Idogo, Ohunbe, Ilaro, Atan, Abeokuta/Sagamu Interchange, ljebu-Ode in Ogun State, Iseyin, Igboora, Igbeti in Oyo State, Gbaji, Agbara in Ogun State and of course the creeks.

“There is a disturbing new trend of smuggling deployed by smugglers and that has to do with massive use of motorcycles to smuggle parboiled rice at 50kg each using bush paths not accessible to vehicles. Cumulative seizure of such means of conveyance is over 100 units in our custody.”