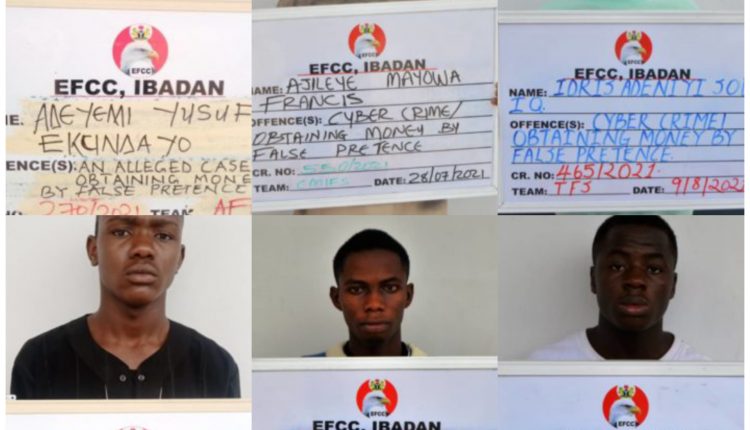 Fifteen convictions were secured by the Ibadan Zonal Command of the Economic and Financial Crimes Commission (EFCC), on Wednesday before different judges of the federal and state high courts in Ibadan, Oyo State.

They were prosecuted before Justice Uche Agomoh of Federal High Court and Justices Ladiran Akintola and Sherifat Adeyemi of the Oyo State High Court on a separate one-count charge bordering on impersonation.

The defendants had pleaded guilty to the charges brought against them, after which Justice Agomoh sentenced Ogundayo to nine months jail term.

She gave a jail term of eight months each to Dada, Anuoluwapo, and Akinniyi, while Olalekan and Ojo were sentenced to seven and three months jail term respectively.

Justice Akintola sentenced Abdullahi to 24 months imprisonment, OgoOluwa and Ekundayo to 10 months each, and Ajileye to six months.

While Idris and Akanfe were sentenced to six months of community service by Justice Adeyemi, Odeku was given five months, and Jimoh and Bashiru were given three months of the same punishment.

The convicts would also restitute their various victims and forfeit the items recovered from them to the federal government.