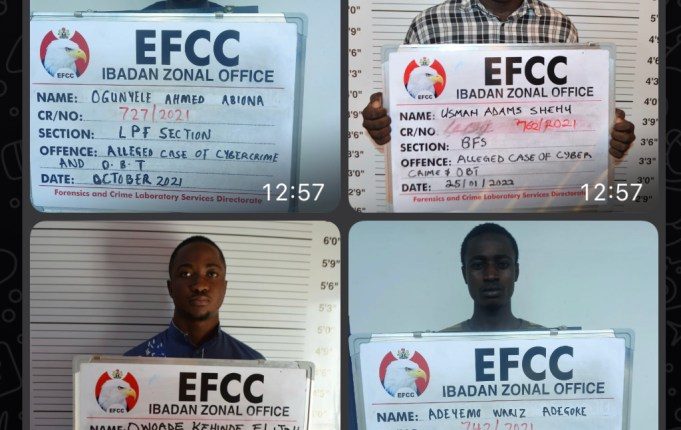 The Ibadan Zonal Command of the Economic and Financial Crimes Commission, EFCC, on Wednesday, secured the conviction of six internet fraudsters on charges bordering on fraudulent impersonation.

They pleaded guilty to their respective one-count charges and were convicted accordingly.

The court also ordered the defendants to restitute their victims.
Oriade is to restitute his victim the sum of $590USD (Five Hundred and Ninety United States Dollars).

Shehu is to restitute his victim the sum of $400USD (Four Hundred United States Dollars) and forfeit one Samsung Galaxy S8 to Federal Government of Nigeria.

Owoade was ordered to restitute his victim the sum of $300USD (Three Hundred United States Dollars) and forfeit an iPhone 6 mobile phone to Federal Government of Nigeria.

Taiwo was ordered to restitute his victim, one Joanne K. Thornhill, the sum of £450(Four and Hundred and Fifty Pounds) through the Federal government of Nigeria.