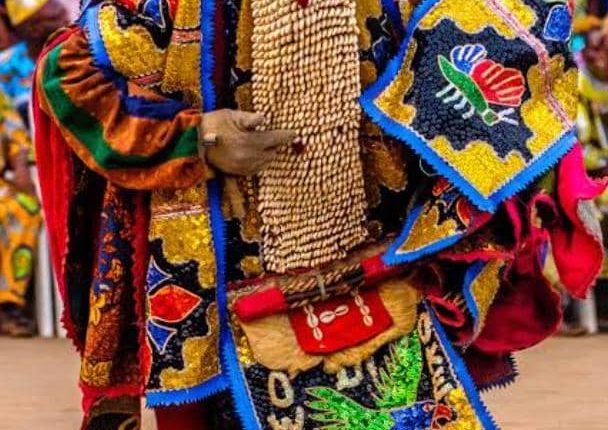 Egungun festival is one of the most celebrated events in Ogbomoso, the land of valiant. It is mostly observed by the traditional religion faithfuls and others who have keen interest in tradition. The inception of this festival can’t be traced to any year in order to forestall history from being distorted; several attempts to get the actual year it starts resulted in a futile exercise.

This fete is observed in every seventh month of the year. All interested Ogbomoso indigenes, both christian and muslim faithfuls from all nooks and crannies, even in disapora usually grace the ‘one and a half weeks’ celebration with their presence to garner myriads of knowledge about the tradition in town.

Some prudent traditional worshippers have keenly contested the fact that, ‘Egungun’ shouldn’t be translated to ‘masquerade’ as it’s usually done by tons of people.There’s wider gap in their difference. According to Merriam-Webster Dictionary, masquerade is conceptualized as “the social gathering of persons wearing masks and often fantastic costumes” while egungun is beyond wearing of masks because there are some spiritual values attached to it. Egungun can, simply, be referred to the spirit or representation of the spirit of the progenitors who had joined the cult of patheons paying august visitation to his scions, which is usually every year. With this assertion, one could vividly notice that interpreting ‘Egungun’ to ‘masquerade’ is outrightly incorrect.

There are various genres of egungun in Ogbomoso, specifically. They are: Egungun Eleru, Egungun Alago, Egungun Orebe, Egungun Egbe, Egungun Ode etc. Some of the egunguns that the writer of this piece could vividly recall as at the time of penning are: Egungun Danafojura (which its mask can absorb fire), Egungun Ajokomogboeo (which sits on the air). Others are: Egungun Lenbe, Egungun Oroko, Egungun Awodagbese, Egungun Kongba, Egungun Omo Titun, Egungun Olukotun( the first to display i.e. trailblazer), Egungun Mate et al.

Okelerin, which is their rendezvous, is seen as the omphalos of Ogbomoso North and Ogbomoso South. Annually, gleefulness is ostensibly registered in their faces; some will be grim faced, wanting the dogs of war to let loose; many journalists will be there to cover the event and some as spectators.

Spiritual visitation of these ancestors is regarded as an immense blessing from God as various prayer points will be placed in his front while placating the deity, libation is always not exempted in the process. Doing this, it brings tranquility into the town and some many things that will kindle upliftment, progress and positive things to the town.

In the antiquity, the festival usually be an interesting one as the egungun and those accompanying it would hold canes with the toga of charms worn for protection sake and to invoke fear into themselves.

It’s lugubrious that a festival being celebrated to bring peace and tranquility to the town is now featured with terror and gangsterism. With the investigation made, one could notice ruckus is usually unleashed by Egungun’s followers. Also, claiming supremacy of power is also one of the prime causes of scuffle among those egunguns. This can be regarded as the negativity the festival has brought to the town.

My experience last two years made me to have the knowledge that not only alcoholic drinks that intoxicates, spiritual powers or voodoos also intoxicate.

At this juncture, I want to avail myself of this opportunity to admonish the families who will celebrate this auspicious festival to inform their people to never disrupt the peace of the land. Egungun festival used to be peaceful, let it not be turned to other thing else. This reminds me of one popular Yoruba apothegm that states: “Ija ko di Ola”, which means mayhem bring not wealth.

The veracity of this assertion can be avouched in the holy corpus of Ogbeyonu that states thus:

Tinubu Is Aware Of My Defection To Accord, He Never Call Me To Return To APC– Adelabu