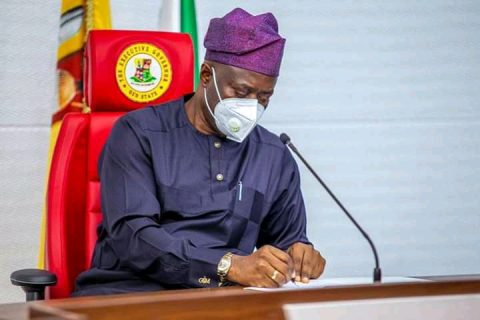 The Peoples Democratic Party in the South-West on Saturday reiterated confidence in the leadership of Oyo State Governor, Seyi Makinde, to take the party to enviable heights.

PDP Zonal Publicity Secretary, Chief Sanya Atofarati, expressed the party’s commitment to queueing behind the governor with unity of purpose to reclaim all Southwest states for the PDP beginning in 2022 with Ekiti and Osun states.

Atofarati, in a statement made available in Ado Ekiti titled, ‘S/West PDP expresses confidence in Makinde’s leadership’, said that the party gave the commitment during a high powered PDP Zonal stakeholders meeting in Ibadan, the Oyo State capital, on Saturday, where the party had extensive deliberations on the crucial matter of moving forward.
He stated, “The zone is proud of Governor Makinde’s record of achievements since assuming office barely two years ago. The entire Southwest PDP is solidly behind him for his exceptional leadership qualities in the running of the affairs of the party.

“We realize the fact that posterity beckons on PDP as the party which produced the only democratically elected governor in the entire Southwest under the able leadership of Governor Makinde.”

He added that stakeholders are ready to join hands with the governor to form a united front and dislodge APC evil regime.

“This is why we are resolute in our commitment to join hands with the governor to sink our differences and work as a united force in order to dislodge the APC evil regime not only in the Southwest, but in all the 36 states of the federation in 2023,” he stated.