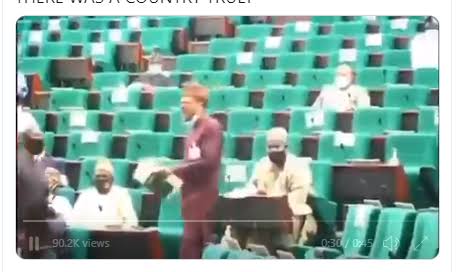 #EndSARS: Not Even Speaker nor his Deputy can suppress my Voice – Hon. Shina Peller Says as he Walks Out During Plenary.

The Lawmaker representing Iseyin/Itesiwaju/Iwajowa/Kajola federal constituency of Oyo State, Shina Peller has expressed dissatisfaction for the way he was snubbed when he wanted to raised an issue of public Important during the plenary session on Tuesday.

Peller noted that the presiding officer, Ahmed Wase, who happens to be the deputy speaker refused to recognized him when he made an attempt to raise an urgent motion.

Subsequently in a tweet, Mr. Peller stated that not even the Speaker, Femi Gbajabiamila or his Deputy can suppress his voice.

“As a HoR member, I represent the people of my Federal Constituency. Any time I stand up to speak, I do not speak for myself but for those I represent. I am their messenger. And nobody, not even the speaker @femigbaja and deputy @HonAhmedWase has the right to suppress their voices,” he stated.

LEKKI BLOODBATHS: Who Gave The Order?

LEKKI SHOOTINGS: Solder’s Continue Shooting At Me After I Jumped Into The River—Ayoola Gives Account Of How He Survived (Video)